There's been an at times heated debate about the point at which a song ceases to be the writer's property and becomes instead the shared possession of those who hear it (As opposed to the few or many who pay to actually own it). It's become more fractured in recent times as we begin the journey to renting all digital art, but remains as perennial as the one questioning the boundary used to define what is pop, or how experiential it's allowed to be before it's no longer a vessel for fantasy and consumption and transforms into therapy for the writer. 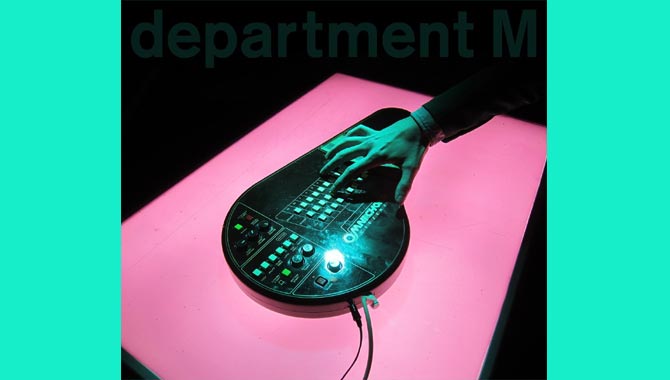 Department M frontman Owen Brinley may hold some of the answers. His former band Grammatics were too esoteric for that purpose: critically loved, they imploded shortly after the release of their eponymous début album, as much victims of their own restraint as anything else. After forming his new venture with fellow Leeds-based producer James Kenosha, Brinley then began to suffer from potentially career ending bouts of Tinnitus and a doppelgänger condition, hyperacusis: in his brutally honest assessment of their psychological impact on his life he's since described mixing panicked fatalism with addiction, desperate measures sought to forget and forgive the spectre of dark potential.

Neither of these qualities are perceived as ingredients for making great pop. But on Department M's second album Brinley has used the feelings as ciphers, perhaps on the basis that music as raw as some of his self criticism would be little fun for anyone, let alone himself as a performer. Also roping in a fellow Loiner in Pulled Apart By Horses drummer Tommy Davison, the tenor of Deep Control is one of a slightly more fluid approach than before, the intent as the songwriter describes "To make a deeply personal and soulful pop-record...of warm analogue synths, future-pop production and experimental textures."

Ambitious sentiment then: Deep Control however takes the necessary risks and brings with it just enough of the pretence by which this long established genre functions at its best, rivalling Wild Nothing's recently released Life Of Pause for its powers of observation. Blending the angles of confession with the absurdity of what we deem entertainment is a near impossible task, but here there's talk of the love we know (Opener Deep Control - Part 1) but with the taint of obsession and narcissism, whilst Bleak Technique's frequently repeated hook "I just can't get enough" underlines how self control is often the first casualty of a war with yourself.

There's clearly a degree of vulnerability to being in this place, one revealed by song titles like Kill My Superstition and Stress Class, but it's covert, especially on the former, a slight, uncomplicated and quite gorgeous siren call: regret has almost never sounded so perfect. It's also emblematic of a record which is for the most part unconcerned about being taken at face value, one adept at changing course. Where for instance Deep Control Pt.2 folds in around a clutch of jarring white noise, the compensatory glamour of Surreal Life and Compulsion's delicate fusion of the symphonic with layers of keyboards, vocals and confusion are the work of a man who wants to alienate no-one.

This returns us to who really owns music anyway. Deep Control could've been a travelogue, something harrowing, then courageous, an exercise in projecting yourself into the songwriters mind through each step forward and back. Instead it's able to be consumed at a more superficial level, taken not for granted but as a gift to enjoyment, less opaque noise for the open hearted. In an era when we know the price of everything and the value of nothing, Owen Brinley's music is still good enough to feel like a cherished possession.