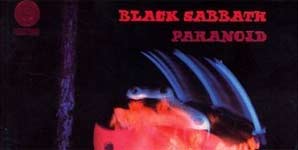 Times may change but the course of history can never be altered, so no matter that the name of Ozzy Osbourne has become synonymous with reality television, spoilt brats for children and an annoying self-obsessed spouse, the fact his band Black Sabbath pretty much wrote the rule book and defined a whole musical genre with one record will always remain their legacy. And what a legacy too, having created possibly the most instantly recognisable riff in the history of heavy metal, not to mention inspired literally every band that's dared to grow their hair beyond shoulder length whilst turning the knobs on the second-hand Marshall stacks as high as they'll go, Black Sabbath quite rightly deserved their induction into the Rock and Roll Hall of Fame three years ago.

In fact, upon listening to 'Paranoid' the album, its hard to believe it was written and recorded nearly forty years ago such is its timeless quality, and even though numerous sub-genres have come and gone in the period since, there will always be a place for near-perfect collections such as this. As difficult to believe in the current context as it may be, Black Sabbath weren't always perceived as the groundbreaking icons this record assured them of being. It was only several months previous that their debut album, 'Black Sabbath', had been giving a mauling by the music press on both sides of the pond, and even looking back at the recording of this album its hard to comprehend that the title track of 'Paranoid' was only a late inclusion on the record, initially seen by the band as little more than additional filler placed alongside the more complex aversions contained elsewhere on the album.

Even back then, the record wasn't exactly welcomed by all and sundry, but Joe Public voted via their wallets and over time it has become something of a symbolic moment in the history and development of rock music in general - an everlasting body of work that like all classics of bygone eras, never deteriorates with age.

So what do you get on this 'Deluxe' edition that makes it a worthwhile addition to your collection? Well, to be perfectly honest, if you already own the album in one of its many issues and formats, there isn't really a great deal else other than sentiment to make you want to invest in this. Sure, the 3-CD set looks aesthetically pretty all boxed up and exquisitely packaged, but content wise, there isn't an awful lot else going on that you wouldn't already possess. The first disc contains the original album, while the second features a quadraphonic stereo version that was mixed in 1974 but doesn't really offer anything substantially different. The third disc, billed as 'previously unreleased material' was probably only thus so because there was little point in releasing instrumental only demos of six of the eight tracks combined with alternative lyrical practice sessions of 'Paranoid' and 'Planet Caravan', which again, don't really stand up too well when compared to the finished versions on the record.

Nevertheless, 'Paranoid' really is an incredible album, from the opening bars of 'War Pigs' through to the pulsating climax of 'Fairies Wear Boots', allegedly written about a scrape Osbourne and co. got themselves into with a group of Brummy skinheads. It probably goes without saying that if you don't own this record, then you really ought to invest in it, but by the same token if you already do, then there really isn't much here for anyone other than avid Black Sabbath collectors to get their teeth into.