In the video for their new single 'When Things Fall Apart', Augustines take us on a journey down to the race track to see Stock Car champion Will Morphy in action. Not only is he the 1300cc champion, the young Brit is the most awarded teen in the history of his sport. 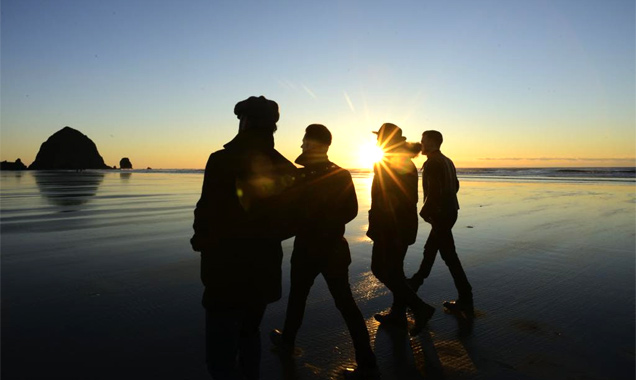 Billy McCarthy tells us about his writing, pressure and music videos.

Speaking ahead of their self-titled second studio album release, Augustines front man Billy McCarthy tells us about writing at his former grade school, the pressure he feels living up to their popular debut album 'Rise Ye Sunkern Ships' and the importance of music videos.

When asked how he felt going back into the studio, McCarthy told ContactMusic he felt "exhilarated" before adding, "I went back to my former grade school actually and met with the music teacher I had. They gave me the keys to my old music room and let me have it for the day, so I sat in there with my grade school teacher and started writing. It was really weird being back there but I really enjoyed it."The singer/guitarist also revealed that the band wrote some of the album in the midst of snow storms; "We took ourselves away to a remote part of Canada to write a lot of the tracks, and really isolated ourselves. We had like really bad snow storms while we were out there but we got a lot of it done!" We caught up with Augustines vocalist and guitarist Billy McCarthy, ahead of the February 3rd release of 'Augustines' which follows on from their popular 2011 debut release 'Rise Ye Sunkern Ships'. Billy offered us some interesting insight on the band's recording techniques, attitude towards music videos, Welsh rugby fans and full English breakfasts! The Brooklyn based band have recently added British musician Al Hardiman to their lineup - joining bassist Eric Sanderson and drummer Rob Allen - for their forthcoming tour of the US and Canada, starting in Vancouver early February and concluding with a trip to Salt Lake City in mid March. 2014 offers to be a huge year for this American indie group!

Contactmusic: Hi Billy, how are you?
Billy McCarthey: I'm really good thanks man!

CM: Your new self-titled album 'Augustines' is set for release on the 3rd February, what can you tell us about the new album?
BM: It's really a continuation of our past work, which we're all really excited about. We were pleased with the reception the first album got and we tried to replicate that with this album. 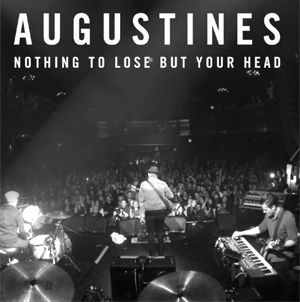 We Are Augustines - Philadelphia

Brooklyn trio We Are Augustines will release their new double A-side single, 'Book of James' and 'Philadelphia (The City of Brotherly Love)', on September 3rd 2012 through Oxcart Records.

'Philadelphia''s accompanying music video is an emotive montage of both footage from their live performances and what appears to be hand-held camera footage of the friendly 5-piece hitting the road and having fun on the beach with their instruments. The track has got the raw flavour definitive American indie music with Billy McCarthy's passion-filled gravelly vocal and upbeat, anthemic guitar riffs - even the lyrics reflect timeless concepts such as the learning to accept life as it comes. 'I'm not sure what my fascination with not becoming a casualty of your surroundings is about but it's, again, a character pleading with great urgency that they can't succumb to shutting down and accepting this as a life', McCarthy said of the ingenious track.
We Are Augustines have barely had a break from touring this year what with appearances at the Leeds and Reading Festivals this summer, a sell-out tour of the UK back in May, a support tour of the US with Band of Skulls and another supporting tour alongside Counting Crows in venues holding thousands. Following that, they are soon to jet back over to the UK for an autumn tour kicking off in Bristol.

We Are Augustines - Juarez

Brooklyn's We Are Augustines released their anthemic new single 'Juarez' this week on Oxcart Records. According to lead singer Billy McCarthy, the song was written after he injured his left hand causing him to struggle with playing with only two fingers that were free from his bandage. 'I played the initial chords with my cut hand high on pills and wrote this song in about an hour'.

Continue: We Are Augustines - Juarez

We Are Augustines - Chapel Song

We Are Augustines' new single Chapel Song will be released on February 27th via Oxcart Records. It is taken from their debut album, Rise Ye Sunken Ships, which will be released in the UK in March 2012. The band will be touring the UK and Europe throughout February 2012, supporting the Maccabees on certain dates.

Continue: We Are Augustines - Chapel Song

We Are Augustines - Book Of James

We Are Augustine's new single, 'Book of James', will be released on November 7th. It is taken from their anticipated debut album, 'Rise Ye Sunken Ships', which is expected to be released on March 5th 2012 through Oxcart Records. The band recently kicked off a series of UK dates supporting Glasvegas.

Continue: We Are Augustines - Book Of James