The Loves - Love You Album Review

Review of Love You Album by The Loves

The Loves are a Cardiff band led by Simon Love. The Loves. Love You is their fourth, and (if they're to be believed) final album before they split forever on Valentines Day this year. Now, if you're expecting the Loves to be a 60s style psychedelic pop band (like I was) then you're going to be in for a real big disappointment. The music is most certainly rooted in the 60s but is more of a 60s pastiche.

It appears they've taken the old adage that 'genius steals' way too literally as listening to the songs is a bit like trying to pinpoint where you've heard them before. The album does indeed throw up one genuine and great song in the form of single December Boy, complete with female vocals, a complete relief from the irritating male vocals that swamp the rest of the record. December Boy comes across like a wistful Shangri-La's and contains melody lines lifted directly (I kid you not) from Do They Know It's Christmas? and Total Eclipse of The Heart. I personally don't like either song but the way they've incorporated it into this track and made it their own is undeniably very clever and more importantly, it works. 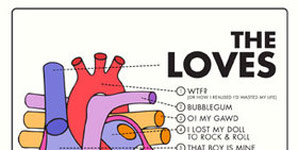 However at times it's difficult to tell whether they actually are being too clever for their own good or are royally taking the piss (I suspect the latter). A prime example here is the annoyingly ridiculous King Kong Blues with daft lyrics and the vocals of a strangled tomcat. Then again this is the kind of reaction they probably want to achieve.

Overall the Loves Love You comes across as a smug irritating inside joke that's not funny to anyone else or if it is I certainly don't get it. Which 'is a real shame because on December Boy and Bubblegum they show do display capability and promise. The saving grace of this album is it's a short one.

The Loves - Love You