The Besnard Lakes - Until In Excess, Imperceptible UFO Album Review

Review of Until In Excess, Imperceptible UFO Album by The Besnard Lakes

If you can get past the 50s B-movie title of The Besnard Lakes fourth record you'll be duly rewarded. The Canadian quartet have started to become the Great White North's equivalent of Sigur R½s. It's all dreamy, soaring melodies and fragile vocals stretching across wide open imagined landscapes. While Beach House refined the art of Dream Pop last year, Jace Lasek and Olga Goreas take it one step further here into a widescreen soundscape of guitars and synths. 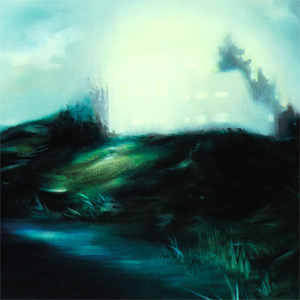 While there's no dramatic reinvention of The Besnard Lakes sound to be found in these 8 songs, there's a renewed confidence that shines through. The lyrics are cloaked in mystery, although there seems to be loose themes of separation that bubble to the surface occasionally. For example, 'People Of The Sticks'' repeated mantra of "I found you, I found you" or 'The Specter''s opening line; "Can you here me knocking from the other side of the beach?" But really the most arresting thing is the sound that's created by the constantly ebbing and flowing waves of guitars.

With the emphasis firmly placed on the sonic journey the record takes, Until In Excess, Imperceptible UFO is remarkably successful in its endeavours. Balancing delicate moments such as the ethereal harp that opens the slow burning 'Catalina', with the feedback-laden cascade of guitars on 'Alamogordo', it's an exercise in creating a glorious noise as much as anything else. The latter track features a 3-minute fade to close the album, but it doesn't feel like it's showboating or surplus to requirement. While other bands may avoid similar flourishes, you get the feeling that Lasek and Goreas have developed a strong conviction to follow their gut instincts. That's perhaps the key to understanding why all the material here is so strong.

Even when they veer into unexpected territory, the Caribbean tinged sixties Pop of 'And Her Eyes Were Painted Gold' for example, it doesn't ever fall into pastiche. It's likely the creative control they exercised throughout the recording and mixing at Breakglass Studios in Montreal is the reason for this. 'People Of The Sticks' is perhaps the most straightforward song here and was also one of the earliest tracks to be completed during the yearlong sessions. As the process went on, Lasek and Goreas developed their ideas leading to more subtle and layered material elsewhere on the record.

If there's one criticism of Until In Excess, Imperceptible UFO it's probably that it lacks the immediacy of a record like Beach House's Bloom. It takes its time to make its point and as such requires repeated listens to fully appreciate the musical depths it explores. But thankfully, despite its dreamlike qualities, it's a record that's memorable long after the dream ends.

The Besnard Lakes - Until In Excess, Imperceptible UFO Album Review