Electro Punk rockers, Robots In Disguise, found success with their undoubted ability to produce mouth watering hook after mouth watering hook, backed up by their extravagant personalities and unorthodox dress sense. Dee Plume and Sue Denim, otherwise known as Delia Gaitskell and Suzanne Powell, have had collaborations with 'The Mighty Boosh' joining the TV Show on tour in 2008, starring as various characters including themselves and two Goths, then performing live at the after shows. 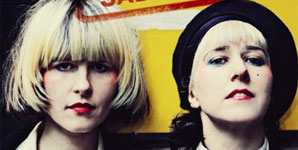 Robots In Disguise - Happiness vs. Sadness