Review of My Main Shitstain Album by Paris Suit Yourself

Big Dada is known for being experimental in their label's choice of sounds and they have now gone for a rock band sound now with Paris Suit Yourself, the first band to do that on the label. This French-US collective certainly have created a zany, in your face sound that has been hitting the squat parties of Berlin with success. 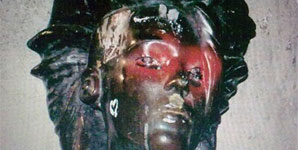 'My Main Shitstain' is certainly an underground album with new wave, Bowie influences and an urban punk (not grime however) fusion that makes the sound rather compelling. There are many folk who appreciate the sound of guitar and 'Sometimes' delivers on that blues riff attitude that all good rock'n'roll does and the psychedelic atmosphere throughout the album, plus some French lyrics, create a very eclectic feel, that could easily be embraced due to it's uniqueness. 'Surprise' puts the band into a more progressive place that is uncompromising and full of attitude.

Paris Suit Yourself are certainly a progressive, edgy and creative band. The fusion is unique and original; however they definitely will not be everyone's cup of tea. For this listener it instantly struck a chord, and I guess that's because it's very underground and different. It's another good signing from Big Dada as its niche sound will appeal to many progressive heads, however this time stretching into the indie guitar domain as well as captivating those lovers of urban chic. It's quite revolutionary in its artistic aplomb however could be a bit pretentious for some. Interesting stuff!

Paris Suit Yourself - My Main Shitstain