Review of Are You Alone? Album by Majical Cloudz

Returning to the studio after their biggest tour to date, supporting Lorde through North America, Majical Cloudz bring their stark honesty back to the studio for their sophomore full length 'Are You Alone?'. 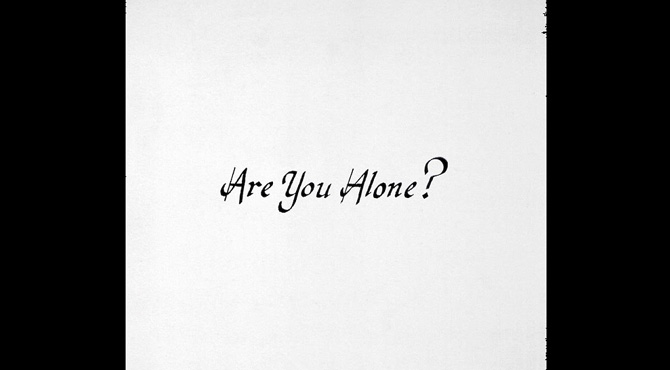 As we've come to expect from the duo, the album is brutal in its simplicity and direct in its sentiment. Impersonator showed us just what Devon Welsh and Matthew Otto were capable of, but here we see them evolve into their sadness and truly intertwine their music with their emotion. This record is always about to implode with the urgency of Welsh's delivery as if he's getting something life-changing off his chest and the best part about Majical Cloudz is that they sound this way because that's exactly what's happening.

This is music you feel in your bones. Welsh's baritone is the perfect mix of smarmy and deadly serious as he talk/sings, "I want to kiss you inside a car that's crashing and we will both die laughing cos there is nothing left to do and we will both die laughing while I am holding onto you." It's hard to regulate your emotions while listening to songs like 'Silver Car Crash' and when you add Otto's wildly interstellar programming into the mix these tracks become insatiably cathartic.

The open nature of these tracks leaves both Otto and Welsh vulnerable beyond belief and injects you into their world to take the loneliness away as you repeat the words, "So if you're lonely, you don't have to be alone, you don't have to be that way." It's not all company for misery though, 'Downtown' is like a warm breeze of friendship blowing through the record with Otto's gentle repetitive whirrs and 80s keys filling you with thoughts of first love and cotton candy smiles.

Childlike xylophone sounds open 'Game Show' and it's one of the most beautiful instrumentals of the record, which slowly builds to breaking point and convalesces into a dark wave of menacing bitterness before seeping back into the shadows. Welsh gets a lot of the focus of Majical Cloudz, though Otto's instrumentals are equally as important to the dynamic. He's accomplished at knowing just when to give and take, without his flourishes of synths over the Bellagio like piano of opening 'Disappeared' the song wouldn't be as resonant. They're the great modern partnership.

'Are You Alone?' is a record that just doesn't stop getting better, you could listen to the implacably frenetic 'Control' a thousand times in a row and Welsh's heart-breaking requests would never be answered enough to stop. The thumping sensuality of the title track is present enough to feel and on an album of phenomenal songs it's bound to be a favourite. It's difficult to imagine anyone hating this record; it's guts and glory type stuff. It maintains all the lo-fi qualities of their early days while truly defining "turn it up to 11" in every single way.