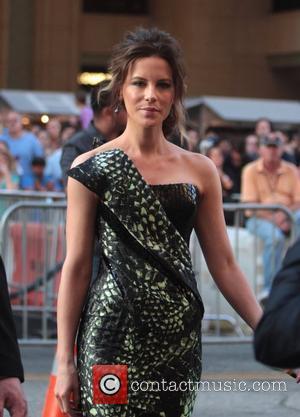 Kate Beckinsale enjoys the role reversal on film sets when her director husband Len Wiseman is in charge because at home she's the boss.
The actress met Wiseman on the set of Underworld and has since appeared in several of his films, including the new Total Recall remake, and she admits it's "strange" when she has to let him take control - because it's so foreign to life at home.
She explains, "Normally he's taking direction from me because he never knows where anything is in the house. He can't remember if he likes parsnips so I'm usually in charge of going, 'No babe, you don't actually like parsnips; you say they taste like perfume.'
"It is a slight gear change at home but I met him that way so it's not terribly shocking."
And Beckinsale insists there are no problems when her husband has to film love scenes between her and another man.
She adds, "The sex scenes and the kissing and all that stuff is by far more awkward for the third party coming in, the second man. I'm OK with it. I think, as a woman, it's possible to be fairly enigmatic. We don't have any movable parts; you just sort of blank out and nobody can tell what you're really thinking. It's much harder for boys."