The Face of an Angel

The Face of an Angel Review

By taking a fictionalised approach to the Meredith Kercher murder case in Italy, filmmaker Michael Winterbottom sets out to show how tricky it is to find the truth in any case, but he actually ends up proving how impossible it is to make a movie based on complex, unresolved real events. The film has a fascinatingly mysterious tone to it, but never comes together into something the audience can properly engage with, mixing big themes with bizarre filmmaking flourishes that only serve as a distraction. 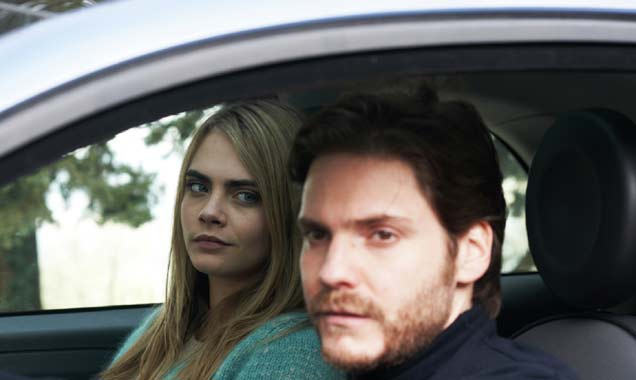 It centres on Thomas (Daniel Bruhl), a London-based filmmaker who flies to Sienna to make a movie about the case of a student (Genevieve Gaunt) who's been charged with brutally killing her flatmate (Sai Bennett). Thomas immediately locates the foreign press corps, which hangs out together to cynically discuss the case. And he starts working with Simone (Kate Beckinsale), who's writing a true crime book. But Thomas is worried that there are too many layers to the story for a movie, and he becomes increasingly confused after consulting with Edoardo (Valerio Mastandrea), an expert on the case who also wants to be a screenwriter. To try to find the root of what happened, Thomas hires the sexy young Melanie (Cara Delevingne) to show him around town.

All of this is complicated by the fact that Thomas has a coke addiction and is reading Dante's Inferno, which combines with his imagination to cause freak-out hallucinations that make everything even murkier. Winterbottom builds this atmosphere beautifully, but falls short of establishing the fever-dream style of an Italian Giallo horror movie. This is mainly because he's trying to have it both ways, creating a wildly disorienting mystery while at the same time trying to make a pointed comment on how the media exploit a personal tragedy.

The cast is fine in complicated roles. Bruhl gives Thomas an inner curiosity even as the character becomes increasingly fragmented. Beckinsale offers some sharp intelligence even if her character is essentially irrelevant. And Delevingne shows terrific screen presence in her first major role, even if Melanie also has little impact on the story. Winterbottom's central idea is that it's impossible to accurately get to the heart of true events even with a news camera, because the general public will always take the side of the prettiest people on display. It's a provocative approach to the subject matter that makes the film worth seeing, especially with a dramatic kick that shifts the focus to the victim and her family. But everything's been so muddled by then that the point is almost lost.