Say what you like about Kanye West the public persona - the man who demands that his privacy be taken seriously but then goes on to start a family with paparazzi-darling Kim Kardashian, or the man who interrupts acceptances speeches - because first and foremost Kanye is a hip-hop artists over anything else. Through his numerous collaborative and solo works he's continued to prove himself as an artist by continually attempting to introduce a new edge to his music and on Yeezus, his sixth solo album to date, this remains the case. 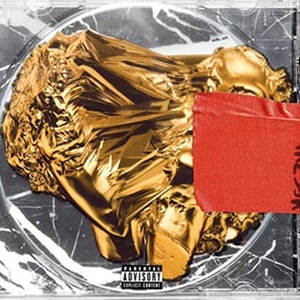 The most immediately noticeable change this time round is the volume of the whole thing; the ear-splitting bass drops and tribal drum beats that serve as the backbone of the album are turned all the way up to eleven and make Yeezus an exhilarating, yet exhausting listen.  From the first four tracks in particular it may come as a surprise to many to find out that not only did Trent Reznor have nothing to do with the album, but only one Trent-affiliate track has made it's way on to the samples list (Marilyn Manson's 'Beautiful People' on 'Black Skinhead'). The other obvious influence comes from the more club-friendly world of electronic music, with Yeezy enlisting the help of some of the biggest dance producers at the moment to great effect (and some, unfortunately, to not such good use). To say that mixing industrial metal, modern house and electro and hip-hop together would be a disaster waiting to happen in the wrong hands would probably be correct for most rappers, but Kanye isn't most rappers.

Just as conflicting is what comes out of Kanye's mouth. His delivery is as Yeez-erific as always, but his content couldn't be more confusing, but maybe that's where the success lies. Whilst West spends the album criticising the fashion industry, the exploitation of the African-American population and more; can you image him recording the album in any other way than head-to-toe in designer wear? It's an album on which Kanye samples Nina Simone's version of 'Strange Fruit,' mixes it with TNGHT's 'R U Ready' and raps about how hard life is when he has to sit in a different part of the VIP box at an NBA game because he doesn't want his current girlfriend to bump into his ex - all in one song ('Blood On The Leaves,'). So yeah confused would be a good way to describe the album in a word, confused, yet beguiling and out of the ordinary, an album that isn't exactly defined perfectly, but some how seems to make sense for the most part.

"No sports bra, let's keep it bouncing" Kanye quips over a bone tingly, assault of a beat on 'On Sight,' and bouncing is exactly how he keeps things. Its Saul Williams made for a dingy nightclub - it's probably the exact kind of thing that Kanye would want to listen to at a nightclub. This feeling pervades over the majority of the album, and in particular the first four tracks (at lest) are tailor-made for a night at the 40/40 Club with Yeezy and co. as they discuss the ills of modern day America whilst drinking Cristal. It'd be more annoying if he weren't so good at it.

'Black Skinhead' and 'New Slaves' are essentially the two singles from the album, being that we actually got to hear them before the album leaked, their industrial, techno beats continuing the perverse tone set by 'On Sight.' Sandwich between the two though is 'I Am A God,' a divisive song and probably the most coherent lyrically. It is as egotistical as Kanye has been to date; "Since the tight jeans they never liked you/Pink-ass polos with a fucking backpack/But everybody know you brought real rap back," boasts the self-imposed saviour of 'real rap.' Like with 'New Slaves' when he raps; "There's leaders and there's followers/But I'd rather be a dick than a swallower;" this is an album that was made not out of necessity, but just so Kanye can show everyone how good he is and help dictate the direction mainstream hip-hop heads down for the next few years.

The problem with an album as unrelenting as Yeezus is that by the halfway point things just don't feel as fresh as they did at the beginning and the songs just become grating and overbearing. By the time we get to 'I'm On It,' the album feels as though it's repeating itself already, and no amount of auto-tune ('Blood On The Leaves' and 'Guilt Trip') or EDM samples will mend this. It is annoying because for all the effort that Yeezy put into the record and the amount of time it took to get here then it shouldn't be so tiresome to listen to the third or fourth time around. He may be looking into the future for the release, but the bulk of the album sounds as though it will be dated in less than a decade. As for the auto-tune; 808's is never going to happen Kanye, stop trying to make it happen.

Thank Yeezus then for 'Bound 2,' a much-needed cool down to an exhausting album and quite possibly one of Kanye's best songs to date (seriously). Like he showed on last year's soundtrack to The Man With The Iron Fists with the track 'White Dress,' Kanye still likes to flirt with the organic hip-hop he made his name with and it's still here where he reigns supreme. "Hey, you remember where we first met?/Okay, I don't remember where we first met/But hey, admitting is the first step," raps a loved-up Kanye; and what better way to end such a conflicting and unfocused album than with a good old fashioned love song. And who better to round-off a love song than Charlie Wilson, whose powerful chorus makes the song what it is.

The bookends of the album are what makes it anywhere near being worthy of the praise it has received thus far, not that the rest of the album is totally disappointing but, overall, the most memorable songs from the album come at the beginning and the end, and that just isn't good enough for an album that is being touted already as the year's best. His narcissism runs unchecked; his supposedly liberal political view constantly gets clouded by his love of white-owned luxury items and the mentions of bigotry are regular and as unchecked as his narcissism, but this is a hip-hop album and it is Kanye so was there ever going to be another outcome. As far as any recent hip-hop albums go or for that matter any recent release, Yeezus would struggle to make the top 100. As for his own work, and following the progress and evolution of Kanye as an artist, this may be his best album to date and is probably his most discussed one too, but one thing it definitely is, is a Kanye West album and no-one can do anything quite like what he can do.