The Night Before Review

This blending of the stoner bromance with the Christmas comedy works surprisingly well, layering gross-out humour with holiday sentimentality. So it's a bit of a shame that the script is thin and ultimately rather pointless. There are observations about the nature of friendship and maturity, but nothing very deep. But along the way, the cast and crew pack in a riotous sense of humour that mainly centres on drugs and genitalia, plus a whiff of Christmas magic.

The movie centres on three best buddies in New York: Ethan, Isaac and Chris (Joseph Gordon-Levitt, Seth Rogen and Anthony Mackie). Over the past several years, they've celebrated Christmas together with a series of traditions including karaoke, Chinese food and loudly festive sweaters. But now Isaac's wife Betsy (Jillian Bell) is about to give birth to their first child, and Chris' pro-football career is beginning to take off. So this will be their last Christmas Eve together, and they plan to make it an epic one. Ethan has secured tickets to New York's most exclusive secret holiday party, which he learns that his not-quite-ex girlfriend Diana (Lizzy Caplan) is attending. Meanwhile, Betsy has given Isaac a box of drugs for a last blow-out, and Chris scores a stash of weed from a mythical dealer (Michael Shannon).

The premise is certainly packed with possibility, and the filmmakers have a ball with the druggy excesses as the night unfolds, including wildly anarchic set-pieces that throw these likeable characters into all kinds of messy situations. The three lead actors make the most of their roles, adding layers of complexity that aren't in the script while indulging in rampant silliness at every turn. And the supporting cast are up for it as well, fully committing to the movie's crazed atmosphere. There are also hilarious extended cameos from James Franco and Miley Cyrus.

Even so, the script never remotely tries to stretch the actors, letting them coast on their chucklehead charm rather than digging for something properly edgy or interesting. This makes the film a bit cute and simplistic, and it also allows the heartwarming sappiness to overwhelm the gross-out antics, which blunts the movie's edges and leaves it feeling sweet and gentle. Still, there's enough going on in every scene to keep the audience thoroughly entertained with playful twists on holiday movie cliches and astute commentary about the rampant commercialisation of American culture. And fans of the stoner comedy genre will feel like they finally have a Christmas movie all their own.

Watch the trailer for The Night Before here: 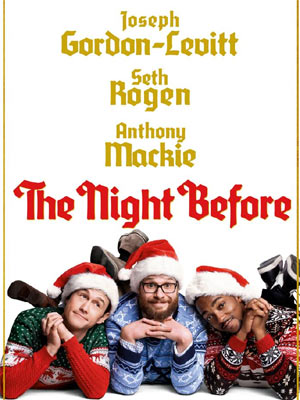