Read our review of Activison's DJ Hero 2 on Sony PS3

We all know now how the guitar hero craze was rocking the gaming world even going so far as prompting the makers of South Park to dedicate an episode to it. All well and good then but what about the hip hop and dance fans? They like music games too right? Thank heavens then for DJ Hero, a spin-off of the Guitar Hero franchise. 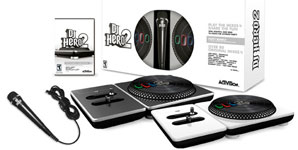 The game itself has a very interesting concept based on 'turntablism,' which (for the uninitiated like myself), is essentially making a brand new song out of 2 other songs by mixing and adding effects. There are 3 'tracks' of music - 2 feature different songs and one has effects and points are scored by pressing the appropriate buttons adding scratches and cross-fading, when prompted and in time with the music. When you get a perfect run you achieve 'Euphoria' equivalent to Guitar Hero's 'Star Power'. When activated Euphoria doubles the player's multiplier as well as automatically cross fading between tracks. DJ Hero 2 also allows 'freestyling' which when played in rhythm with the track allows the player to add several points to their score.

There is the career mode 'Empire' in which you create a DJ Empire, creating your own nightclub and brand and also a multi-player (battle, on-line) mode which make the propensity for huge fun. Having never played the original, it is difficult to convey the improvements that have been made. However I have it on good authority that the game-makers consulted top DJs in the making of this and it has paid off. The use of the specialised controller, an actual turntable is ingenious and adds a definite touch of realism to proceedings.

The soundtrack is diverse and there are even tracks for an indie-kid like myself with the likes of DJ Shadow, The Prodigy, House of Pain and The Chemical Brothers making a welcome appearance. Marks are lost for the inclusion of Kanye West and Sean Paul but a storming version of Don Cha by the Pussycat Dolls certainly puts the fun back in to the proceedings. Even the classics get a fresh airing, Grandmaster Flash, Malcolm McClaren's Buffalo Gals and M/A/R/R/S Pump Up The Volume find themselves revitalised and reinvented. Overall the mixes are of the highest quality. However with them being 'mixes' this makes the sing-along option rather difficult as many people will be familiar with the originals rather than their remixed counterparts.

This could be viewed as a negative, but the potential fun it generates, ie watching your mates stumble awkwardly over the words is priceless and with the potential of some real comedy gold this makes it a (possibly unintentional) bonus.

I can imagine a game such as DJ Hero 2 annoying the hell out of the serious hardcore 'nerd' gamers but for the other 95% of us - the casual gaming population - it's a real fun addition to any collection. Speaking on a personal level and as a casual user, I would previously have never in a million years considered buying this game. However after having a good go and taking into consideration the amount of fun its provided in my household I can now announce myself as a complete convert to the cause and look forward to rocking the house a lot more.