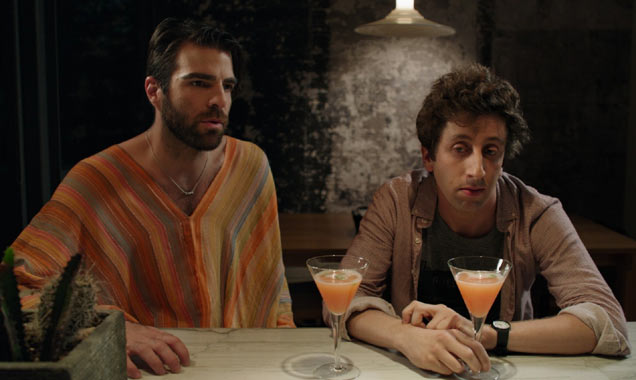 Helberg plays Quinn, a 28-year-old hypochondriac who works as a florist, afraid to pursue his desired career as a jazz musician. He's only ever had one girlfriend, Devon (Melanie Lynskey), and after 10 years together feels like it's time to propose. But this thought sparks a doubt in his mind, which is fanned into a flame when his sexy work colleague Kelsey (Maggie Grace) confesses that she has a crush on him. Quinn's best pal Jameson (Zachary Quinto) isn't much help, and soon Devon has had enough with Quinn's sudden distance. So she moves to Paris to stay with family friends and get some perspective. In a state of confusion, Quinn follows her there and is shocked to discover that she has already struck up a perhaps too-close friendship with handsome violinist Guillaume (Ebon Moss-bachrach).

Meanwhile, the film throws in several random gags that aren't remotely humorous, as Quinn's ongoing eye infection leads to a ludicrous slapstick-farce climax. Some adept side players add enjoyable moments, including Alfred Molina as Quinn's dad, and Judith Light and Jason Ritter as Devon's mother and brother. But the script's intriguing exploration of the tension between complacency and true happiness is badly undermined by some achingly simplistic plotting. So in the end, the audience doesn't really feel like any of these people deserve each other. Which is a bit of a problem for a rom-com.