With an ingenious concept, this fairly simple film becomes one of the most gripping thrillers of the year even though it rarely leaves a wood-panelled conference room. Since the 1960s, British officials have met to role-play various scenarios about how a global nuclear war might play out, with their findings going into the eponymous War Book. Watching this group go through a fictional scenario is riveting, because it offers striking insight into our precarious political system. 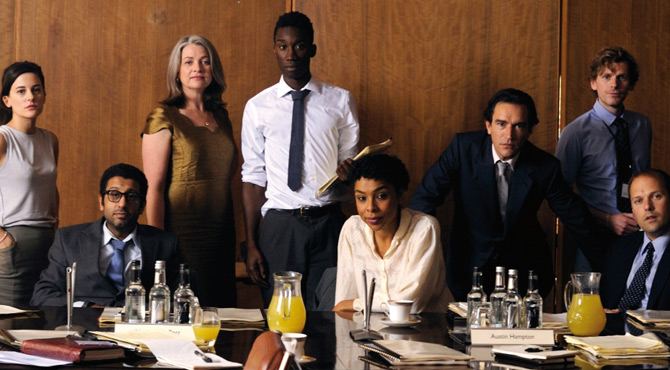 The film takes place during three 30-minute meetings over three days in 2014, as eight relatively low-level officials and one hapless Member of Parliament (Nicholas Burns) gather in a London boardroom. Philippa (Sophie Okonedo) chairs the meeting in the role of the home secretary, as her assistant (Phoebe Fox) reads a chilling brief about a nuclear bomb that Pakistan detonates in Mumbai. Playing the Prime Minister, Gary (Ben Chaplin) takes over, holding emergency votes on diplomacy, humanitarian aid and whether the UK should be quarantined to keep radiation sickness out. And as the situation deteriorates, differences of opinion begin to emerge around the table, most notably about the repercussions of joining with Britain's allies to launch a retaliatory nuclear strike.

For a movie that consists almost entirely of people sitting in a room talking, this is remarkably visual, never looking like a claustrophobic stage play. Director Tom Harper sends the camera prowling around the room, occasionally glimpsing normal life continuing outside the window. And in between the meetings, the people also have their regular jobs to deal with. Meanwhile, their dialogue is packed with biting humour, power plays, rivalries and some startlingly vivid emotions. While some interaction hinges on short, sharp verbal gymnastics, other segments require much closer attention as the conversations wander through lengthy discussions and anecdotes. The only scene that feels out of place is a pre-meeting encounter between Chaplin and Phoebe Fox that touches on the connection between power and sex.

All of the actors are excellent, bringing plenty of personality to their dual roles. Okonedo gives the meatiest performance, straining to wrangle these slippery personalities to the task at hand while feeling everything very strongly herself. Chaplin and Kerry Fox add a hawkish edge, contrasted to Shaun Evans' thoughtful character, whose personal journey is the most sympathetic in the film. All of this is extremely pointed, but as Jack Thorne's script explores the ramifications of one horrific act, the film reveals with striking honesty just how fragile our society is. And just how important it is to talk to each other before dropping bombs.