Miles Teller and Analeigh Tipton are smart enough actors to make the most of this uneven romantic comedy, which never manages to disguise the standard formula, even with a gimmicky premise. So while the plot and characters are simplistic and artificial, at least there's some charisma on the screen to keep us entertained. There's also a spark of lively chemistry that makes the hokey romance somewhat amusing. 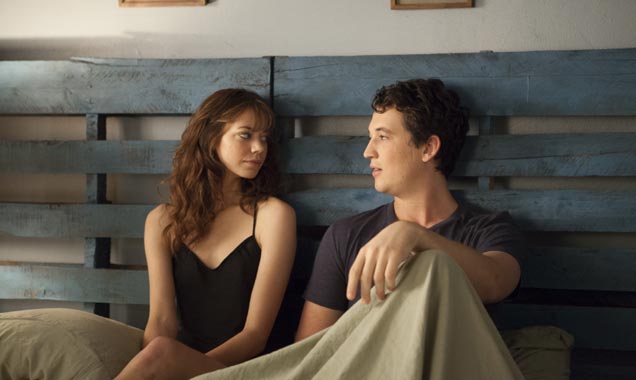 It's set in New York, where Megan (Tipton) has moved in with her loved-up friends (Jessica Szohr and Scott Mescudi) to recover from a bad break-up. After a run-in with her ex (Josh Salatin), she goes online in a moment of desperation and then heads to Brooklyn for a one-night stand with Alec (Teller). But when she tries to sneak out in the morning, she finds that they're snowed-in, unable to leave the building. Super-defensive for no real reason, she creates a war-zone in the flat, and they eventually agree to be ruthlessly honest with each other. If they're going to be trapped together, they might as well learn something useful.

There's never a question of where this is heading, although the script makes Megan such an angry shrew that we really don't like her at all for much of the film. She only calms down when Alec produces some weed (a misogynistic plot point), and as they finally begin to communicate Tipton and Teller are able to inject an enjoyable mixture of intelligence and wit into their rambling conversation. This makes them feel more realistic, and lets the film make some sharp observations about the nature of courtship in the world of dating apps. Yes, looking for a partner online is difficult even when "the bar is set so very low".

As things develop, writer Mark Hammer and director Max Nichols (son of the late-great director Mike) continually shift the film's tone, which makes the characters feel inconsistent. At times it's a battle of the sexes, but there are also moments that drift dangerously close to soft-porn leeriness. Indeed, the film's approach to male-female issues is simplistic, including that distinctly American contradiction that's both obsessed with sex and terrified of it at the same time. Even more engaging are the much more important themes gurgling under the surface on the conversation, such as how difficult it is to be happy in the rat race, and how dangerous it is to put too much emphasis on ambition. But these things are far too complex for an unsophisticated rom-com like this. Distributed by: E One Entertainment