Almost criminally entertaining, this preposterous thriller mixes buckets of humour and emotion into the violent, twisty action. And Kevin Costner gets his best role in years, a remarkably complex character who's unpredictable and thoroughly engaging. So even as the story grows increasingly ridiculous, the film remains both gripping and a lot of fun.

It's set in London, where hot CIA operative Bill (Ryan Reynolds) is on the trail of an evil anarchist (Jordi Molla) when he's captured, tortured and killed. To stop an imminent attack, the CIA chief Wells (Gary Oldman) needs to know what Bill was working on. So he calls in scientist Franks (Tommy Lee Jones), who has been experimenting with transferring memories from brain to brain in animals. For his first human trial, he copies Bill's dying memories into the only suitable brain available on such short notice: psycho killer Jericho (Kevin Costner), who's serving a death sentence in prison. And now Jericho is desperate to sort out the chaos in his head.

Director Ariel Vromen (The Iceman) keeps everything moving so briskly that there isn't time to stop and think about how silly the premise is. All of these characters act on their basest impulses, never thinking through anything before they charge into the next situation. Viewers who try to make sense of the plot, or of London's geography, will find their brains aching like Jericho's. So it's better to just hang on and enjoy the ride. The film's edgy, urgent tone adds the illusion of depth amid the mindlessly brutal violence, while the formidable cast adds weight to a variety of rather thinly drawn characters, from Oldman's bluster to Jones' wry wit. Only Costner gets some real depth to play with, and Jericho is constantly surprising, mixing a killer instinct with brainy invention and some properly dark emotions. His scenes with Gal Gadot (as Bill's wife) are unnervingly tense and moving.

These are the moments that make this film much more than the usual action thriller nonsense. And despite the absurd set-up, the script continually wrong-foots the audience, killing off main characters and sending the narrative in unexpected directions. Even Molla's villain is more intriguing than the usual baddie. That said, the movie has absolutely nothing to say about its central themes of whistle-blowing, terrorism or political paranoia. But in Jericho's potential rebirth from mindless killer to quick-thinking maverick, the movie manages to say some intriguing things about the nature of the human soul.

Watch the trailer for Criminal: 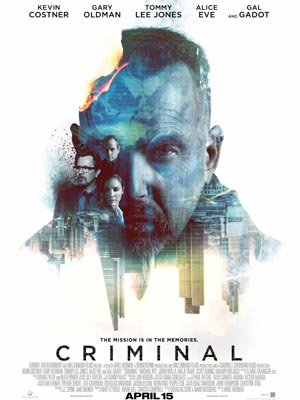