Alice Through the Looking Glass

Alice Through the Looking Glass Review

This much more light-hearted sequel reinvigorates the franchise after Disney's quirky but murky 2010 reboot of Lewis Carroll's classic, which sent the heroine into Underland (not Wonderland) for a dark adventure that spiralled into a Lord of the Rings-scale battle. Thankfully this time the odyssey remains personal, centred on lively characters rather than overwrought plotting. And Alice's time-travelling quest is both pointed and engaging.

After captaining her late father's ship on a global journey, Alice (Mia Wasikowska) returns to 1875 London to bad news: her mother (Lindsay Duncan) has made decisions that take her future out of her hands. As she struggles to respond, she is summoned back to Underland to help her friend Hatter (Johnny Depp), who is emotionally devastated by the fact that his entire family has been killed. So Alice decides to help by confronting Time (Sacha Baron Cohen) and stealing a device that will allow her to travel back to help the younger Hatter. But she also becomes entangled in the early life of the White and Red Queens (Helena Bonham Carter and Anne Hathaway), and the feud that grew between them as young sisters. Meanwhile, Time is terrified that Alice is unravelling the fabric of reality.

The emotional nature of Alice's mission adds a surprising layer of suspense to the entire film, while director James Bobin (The Muppets) adds a breezy comical tone to Tim Burton's stunningly visual designs. Some of the more wacky flourishes don't quite work (such as the "sea of time" imagery or Time's hand-powered vehicle), but the film more than makes up for these with wonderful character details. This lets the actors relax into their roles while cranking up the surreal touches. Wasikowska is great as the plucky heroine fighting for her right to control her own life, a strong point that's made without preaching.

And then there are the colourful figures around her. Hathaway and Bonham Carter get to bounce off each other much more this time in a riotous collision of their too-happy and too-angry personalities. Depp makes Hatter even more childish and dreamlike than before. And Baron Cohen is terrific as the frazzled keeper of the machinery that keeps everything ticking along. The effects involved in creating each of these characters, as well as fully animated critters they interact with, are sharp and inventive. The colourful sets and costumes are just as impressive. And the complexity in the themes and characters makes this a remarkably punchy exploration of guilt, jealousy and regret, all infused with a deranged sense of humour.

Watch the trailer for Alice Through The Looking Glass: 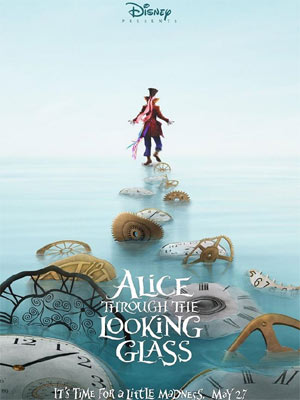