Review of Toward The Low Sun Album by Dirty Three

Australian trio 'Dirty Three' consists of violinist Warren Ellis, guitarist Mick Turner and drummer Mick White. With Ellis having been a member of 'Nick Cave and the Bad Seeds', and Turner and White having worked on a 'Cat Power' record, 'Dirty Three' has proved a release from the restrictions of structured song writing. This is evident as 'Toward The Low Sun' is their eighth album, full of free flowing experimentation and intricate improvisation. 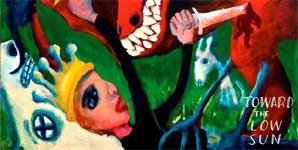 Opener 'Furnace Skies' provides a warm welcome with a distorted guitar providing the basis to the track, cymbals rattle chaotically around screeching strings and stuttering chords. Drums roll freely to create a free jazz sound which throws you in at the deep end, whilst preparing you for the rest of the album. 'Sometimes I Forget You've Gone' opens with a gentle piano part juxtaposed to the uncontrollable drum (can it be called a beat?) adding to the track in the form of percussion rather than a steady beat. Their folk roots begin to filter through for the first time in 'Moon On The Land', calm strings build up and down whilst a plucked guitar lies gently around a subtle, more conventional drumbeat.

As 'Toward The Low Sun' progresses the Melbourne trio seem to relax back into a more recognisable, blissful state, with 'Rain Song' and 'The Pier' not being dissimilar to much of the 'Ocean Songs' material, released in 1998. Cymbals shudder and echo in the background and Ellis' intense yet inconspicuous violin parts settle at the forefront of the tracks. The pinnacle of the album seems to be the psychedelic, jazz, rock number 'That Was Was', White's drums crash and roll as Turners guitar chord progression compliments the irrepressible violin, you could easily imagine the last minute of the track to be a casual jam session for the trio. The alternative, folk soundscapes of 'Ashen Snow' is reminiscent of the instrumentation to a 'Midlake' track with a soft piano opening whilst flutes and strings take their turn to join the mix, layering up in a 'Mike Oldfield' fashion.

After six years away 'Toward The Low Sun' is an enchanting return, with a mix of truly experimental, unconventional tracks alongside sophisticated often dreamlike folk pieces. Evoking different moods and thoughts in every song, the album is as dynamic as it is emotional.

Dirty Three - Toward The Low Sun