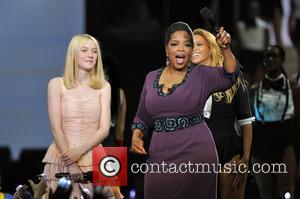 Actress Dakota Fanning is hunting for her husband-to-be at college after learning it's the best place to meet your life-long mate.
The Twilight star is currently studying psychology as a freshman at New York University and the 17 year old admits she's secretly scoping out the scene to find her first serious boyfriend.
She tells Cosmopolitan magazine, "There's something exciting about the idea of going to a city and meeting a guy. I've had really only one boyfriend - just someone I went to school with. It's strange when you meet people who are like, 'I met my husband in college.' It's weird to think about, like, 'Is that guy my husband?'
"(I fantasise) about meeting someone in a coffee shop, and you drop something and they pick it up, you know?"
But so far, Fanning has been too busy to let romance flourish.
She adds, "I never have enough time for anything like that."