Review of Bigfoot Album by Cayucas

Cayucas give us their debut album, 'Bigfoot', one that is only 8 tracks long, but it's a good length. It's enough for Cayucas to grow on you without outstaying their welcome. By the way, their name is pronounced "ky-yook-us", just to prevent any awkward pronunciation issues when you're trying to tell everyone to add the Santa Monica band to their summer playlists. Whether you're heading to the Bahamas, a chic city, a muddy field or your bedroom. 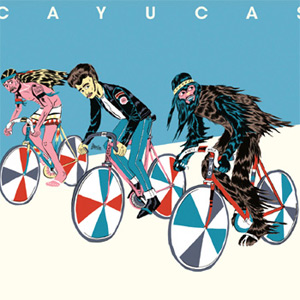 'Bigfoot' is a summer album through and through, bubbling with a nostalgic assortment of swaying rhythms and clap-along delights - 'East Coast Girl' playsthese elements well. Trouble is, there's one comparison to Cayucas that's coming thick and fast in the form of Vampire Weekend and it's true. The last two tracks especially 'Ayawa 'kya' would have settled nicely into Vampire Weekend's first album, due to it's made up title and unconventional words - 'running down the stairs like clickety clack'. It's like the long lost cousin of 'Cape Cod Kwassa Kwassa'. Title track 'Bigfoot' and 'A Summer Thing' also has a similar connection to the New York quartet, in its ploddy drums and intricate, high-pitched riffs.

Actually, there's parts of each song that could've easily tucked themselves into 'Contra' and no one would have batted an eyelid. Opening track, 'Cayucos' is named after a place in California, just like their band name, but with a change of vowel. It sets the surfy theme with summery strums and Frontman Zach Yudin's commands, "Come on snap your fingers, come on clap your hands, come on stomp your feet, as you fast as you can". It's all getting a bit physical in the Cayucas camp. Yudin's quirky words repetitively crop up like in 'High School Lover' we get the very catchy, "Oh Elizabeth, don't keep me guessing, I opened up the door and saw you undressing". 'Deep Sea' offers up the blissful, "I wanna be a deep sea diver, swimming in a foreign sea, where the sun shine shines like wildfire".

A rich calypso tone of 'Will "The Thrill"' is just enough to transport you off to somewhere tropical with an ice lolly and cocktail in hand. The catchy chorus rides along with the free beat - "Oh my god is this actually happening to me, off from the side of the road you looked over cautiously". Cayucas have produced a nice snapshot - Polaroid of course - of the warm, carefree sound they want to portray in a charming 30 minute slither. But, the band need to experiment a bit more. It's a cute 30 minutes, but they're running the risk of being too much of a match for Ezra Koenig and the gang.