Review of The Stand In Album by Caitlin Rose

To better her 2010 album release Own Side seemed something of an unlikely outcome for Caitlin Rose, the Nashville-via-Dallas songwriter, with a hefty country tradition flowing through her veins. Then, she was a plucky young songwriter, erring on the brash side occasionally and a reserved, but confident performer, with a pocket full of neat tales to share. Now, in a relatively short space of time, she has emerged once more with new album The Stand In. That plucky young songwriter just got pluckier, rangier and a great deal more commanding than before.

The opening bars of the opening track, 'No One To Call,' start with a trashy clang of rock and roll guitars, a pressing reminder that Caitlin (in her songs, at least), always has one foot in the gutter, trying to get into, or out of, some downtown bar or other. There is a staunch refusal to fit neatly into the pristine country music model that could probably make her a star back home (her mother, interestingly enough, possesses a Grammy for writing for Taylor Swift. There are distinct signs of rebellion in Caitlin's style). She describes her songs as "sad" or "bitchy." We'll have them tagged as bitter, delightfully regretful, observant and heartbreakingly funny.

Even Rose's attempts at being self-celebratory end up tinged with sadness. The slow waltz-like number, Pink Champagne. "Pictures in the wedding place, of the fallen stars / won't begin to take the place of how beautiful you are / here's to you, here's to me / and may we always feel the same," the song starts out, before moving on to chintzy vintage visions of Chantilly lace. Before you know it, that wistful vision has departed and Caitlin's focusing on the tears in eyes, the man waiting to take his place, a sense of resignation ("seeing how we've both said yes / I guess we'll follow through") and impending regret.

'Silver Sings,' musically, sounds like an attempt at a summer pop hit. Under the upbeat riffing, the snappy percussion and the slight change of register, as Caitlin's voice is lightened and breezier than normal, there's talk of a "darkness in the corner of her eye." Sweet nothings are swapped for 'sweet nothing,' that lightness gets weighed down as the song persists, a sense of its author giving up on the very idea of optimism. Smoke rings "curl and die upon a breeze," and you get the sense that happiness can't help but asphyxiate in the world she creates in her songs. If this all sounds a touch too depressing for your liking, it's worth noting that Caitlin Rose also has a rich vein of dark humour that lifts even those darkest of moments. 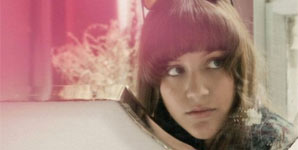 Caitlin Rose - Own Side Now