Twee-pop bands have always been interested in writing songs about childhood, but they've mainly portrayed it as a time of simplicity and innocence, a time before sex and death and responsibility. Some groups were playing with this idea, using it ironically (and I'm sorry if this comes as shock to any especially na 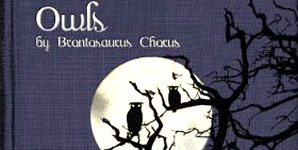 Owls opens with a eerie spoken word vocal which warns dispassionately that 'in the room across from the old dead tree, the owls see everything'; it's a message which recalls Alan Garner's terrifying children's book The Owl Service. Like the kids in Garner's book, the protagonist of the album's second track 'Sandman' is scared of demons which may or may not be real, 'hid there 'neath the moonlit covers/far away from arms of mothers'. 'Scissorman' also references childhood monsters; it's a nicely sinister, fragile track, featuring an appropriately sliced up, echoing vocal.

All of which may sound a long way from 'You! Me! Dancing!'. In truth, Brontosaurus Chorus seem happy to leave the LC! comparisons behind; the only track here which sounds much like them is 'One Great Mind'. Okay, it sounds a lot like them, conjuring up a similarly frenetic, chaotic, joyfully shouty vibe and utilising a guitar riff and bassline which owe a great deal to Hold On Now, Youngster. But it's only one song, and the rest of the time the band seem intent on creating their own sound. Many of the other tracks have a slower, more thoughtful, less exuberant style dominated by Jodie Lowther's intimate vocals and a rich string sound provided by Helen Jackson's cello and the violins of Shalini Santhakumaran and Steph Fuller. Typical of this approach is the excellent 'Myth', a lush, slowburning track full of sweeping strings and cynical sentiments ('Falling for the myth of love again/a different story, same old end') and augmented by a lovely closing trumpet solo. Elsewhere, the string players excel during comparatively up-tempo numbers such as the rollicking 'Louisiana'. It's a good record, an interesting record, and one which sees the group taking a much needed step away from a twee-pop scene which is in danger of becoming stagnant.