Angelina Jolie Wants A Role In 50 Shades Of Grey 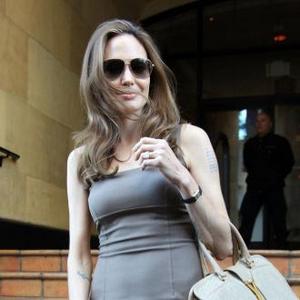 Angelina Jolie wants to plays Anastasia Steele in the movie adaptation of 'Fifty Shades of Grey'.

Workers on the set of 'Maleficent' persuaded Angelina to pick up E L James' book and since then she has become interested in a part in the forthcoming motion picture.

A source told the Daily Mirror newspaper: ''Angelina kept hearing about the book while she was in the UK. All the girls on set were talking about it and how it's being made into a film.

''Angelina went out and bought herself a copy, thinking she'd love a part in the hot topic on everyone's lips at the moment. She knows the film is bound to be a huge hit.''

The fictional story tells the tale of virginal girl slowly consumed by the charms of a man named Christian Grey.

Angelina is famed for dressing in bondage-style clothing in the past and famously wore the blood of her ex, Billy Bob Thornton, in a vial around her neck.

The insider continued: ''Ange is dead-set on a major part. She's up for the challenge.''

Other stars in line for the role are Emma Watson, Katie Cassidy and Scarlett Johansson.