Review of Instructions Album by Heck

Noise terrorists Heck (formally known as Baby Godzilla) have arguably been the most key band to heavy music in the UK over the last few years. Their gigs are what have made them truly something special, making a name for themselves as the craziest band going playing shows where the stage is ignored by guitarists/vocalists Matt Reynolds and Jonny Hall as they prefer to just run rampant amongst the crowd. Architecture is climbed, instruments are destroyed and it's just the craziest experience on Earth right now. After a couple of EP's and singles Heck finally have a full length album in the shape of 'Instructions' which, just like with their shows, sees the band giving everything they have when it comes to causing bedlam. 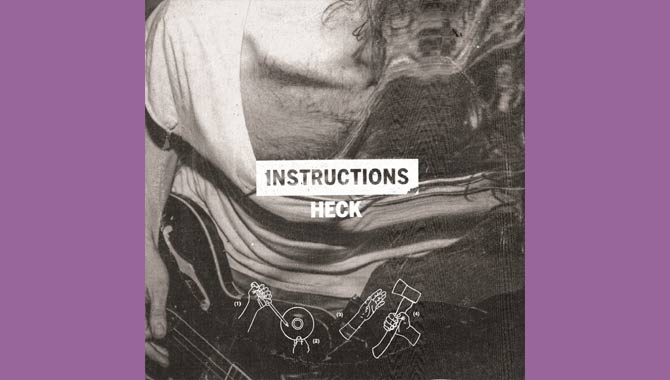 From the start it's exactly what you'd expect from Heck with 'Good As Dead' being an uncontained racket from every angle, but simultaneously having a firm groove. There's also lots of twists and turns from the way the rhythm will switch from being a million miles per hour to discordant to just straight up feel good with fun licks. It's a good reputation of what much of this record is like. Thrillingly crushing with many twists and turns.

Speaking of crushing 'The Breakers' is maybe the most brutal thing the band have ever done and considering this is Heck, that's saying a lot. This song is just explosive riff after explosive riff and whilst that's what the majority of Heck songs are like, this is one armed with extra dynamite. The ending switches to their slower and more stompy side making you want to throw yourself everywhere whether you're in your room or at a show.

Following on from the sluggish end of 'The Breakers', 'Totem' picks up the baton starting out sludgy and thick, but not for too long as this then goes into something that's almost smooth jazz with classy, relaxing tones from the rhythm section and there's also what sounds like a harmonica in the background. It seems that Heck want to catch you off guard with more ways than just kicking your face in with their ruthlessness.

A handful of the tracks are reworked versions of older Heck songs. 'A Great Idea Bastardised' is still the same anarchic rollercoaster just with tighter playing and crisper production. 'The Great Hardcore Swindle' remains a fun punk n roll jam akin to Pulled Apart By Horses at their best, with this updated version featuring more manic riffs and drumming here and there.

The final song here 'I. See The Old Lady Decently II. Buried Although III. Amongst Those Left Are You' is unbelievable and surely even the most die-hard Heck fan couldn't have ever seen it coming. A 16-minute-long epic, taking up almost a half the record, that's divided into three parts. This isn't long in a Sunn O))) way where so little music is played and dragged out. It's the polar opposite with Heck for the most part remaining their feisty selves and seemingly trying to stack as many speedy riffs as possible on top of each other. If we were to go into detail about everything here this review would be a few thousand words long.

Seen as though the average Heck song does a stellar job of fitting a lot into just a few minutes, if you didn't know otherwise you wouldn't be blamed for thinking that 'I. See The Old...' was divided into several parts or that it was an EP by the band as opposed to just one song. Of course with it being the length that it is Heck give themselves some room to tread new ground for themselves, particularly towards the end where there's a spacious and delicate section with glacial guitars played in a post-rock style. When the song blows up one last time it actually feels pretty sombre with Reynolds repeatedly yelling "This isn't over. This will never be over" over moody feedback and airy, but tough guitar stabs which transcend into solemn bluesy licks. Whilst rage is often the emotion Heck push to the brink it's something to hear them more reserved and just adds to the pile of things that catch you off guard on 'Instructions'. When you're as volatile as Heck the most shocking thing you can do is calm down.

Like all great chaotic albums, it's actually overwhelming how much there is to process on 'Instructions' and that's kind of great. Because of the sheer amount of riffs and unpredictability that's squeezed into these 43 minutes you're likely to still be discovering things even after dozens maybe even hundreds of listens. Heck are still ultimately best experienced live as it's impossible to fully capture the madness that goes down at their shows on record, but boy have they come close with 'Instructions.' It's that energy and fire that's made this record set the bar for heavy music in 2016. It's a bar few are likely to match.