Review of EP One EP by Heart of Oak

It's difficult to bring something new to the party when you're one man with just an acoustic guitar. Heartbreaking honesty and a distinct turn of phrase are pretty much all that you can rely on to make you stand out from the crowd. Heart Of Oak's self-released debut EP demonstrates an astute ability to be able to reach both of these goals. 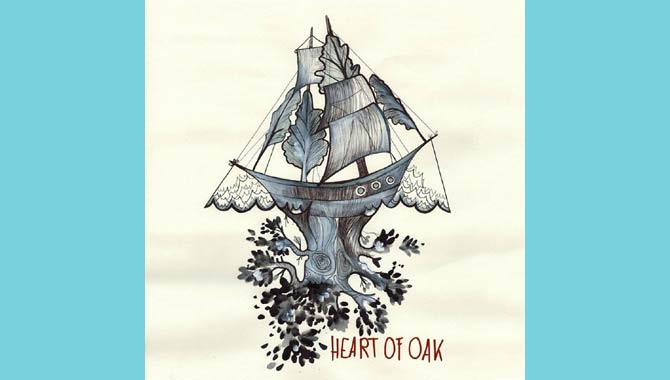 It's all the more impressive considering EP One is the first studio outing for this one-man band. While I must admit to knowing the man behind the moniker, Jimmy Broomfield, this isn't an instance where friendship blinds you to deficiencies, papering over the cracks because the voice is so familiar. Broomfield has closely guarded the genesis of the studio versions of these songs before presenting them to the world, and while EP One has its faults, I think few people would disagree that it's a hair's breadth away from achieving everything it sets out to.

Falling frustratingly between a concise EP and a full-length album is certainly an issue for me. However when you consider that there's no filler in the seven songs here, this choice conveys enthusiasm and a genuine attempt to release something artistic into the world, rather than some sort of naivety. It's a risky move too, with the spotlight on just Broomfield's voice and guitar. The absence of other instrumentation could lead to listener fatigue with the approach over nearly 30 minutes of material here. The skilful execution of these songs means that's never an issue though. The sole additional instrument is a distant organ line on opening track 'Faded Flags'; it benefits the song and does suggest that a similar approach elsewhere could have added an occasional element of light and shade. It never feels quite like a missed opportunity though, because there is a very deliberate artistic choice that's been made to present the bare bones of these songs with just a guitar and vocal throughout.

Recorded in a single day by Bob Cooper at Airtight studios in Manchester, the minimalist approach uses the acoustics of the room to enhance the sound of the material here, and that's a real benefit to recreating an 'as live' performance. Very occasionally the playing feels a little laboured such as a couple of the changes on 'Better Weather', but for the most part Broomfield effortlessly skates over his fret board.  Broomfield's real strength though is his lyrics and turn of phrase, for example on the final track 'Untitled' he tells us: "All my friends, they're just like me, we're all trying to hold on introspectively". There's an element of autobiography to the heartbreak he's writing about, but as suggested by the name he's adopted, there's also strength in the heritage and experience he's presenting. Heart of Oak is after all the official march of the Royal Navy and closely relates to Broomfield's home in the New Forest on the edge of the Solent. Lyrically there's something timeless to the themes he explores and references such as "tin cans and twine", which suggest an old soul hiding in a younger man's body.

It's an impressive debut for all these reasons, and while the occasional technical issue or absence of other instruments could be seen as flaws, they help to present material where the rough edges have not been completely polished away. That's appropriate, because at the core of these songs lies a Heart of Oak.