As one quarter of critically acclaimed experimental folk outfit Grizzly Bear, Chris Taylor's status as a veritable musician and songwriter of some repute is all but assured. Although roped in with New York's avant-garde set purely by logistics rather than anything else, Grizzly Bear are something of a unique entity as demonstrated by 2009's excellent 'Veckatimest', an album responsible for relaying them to a wider audience. 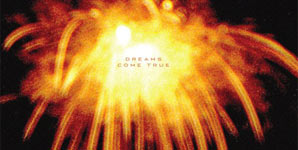 Although initially a bass player by trade, Taylor has developed into a dextrous multi-instrumentalist while adding a major string to his already accomplished bow by becoming the band's producer, not to mention working on numerous other artists records in various guises. Bearing all that in mind, it was perhaps inevitable that a solo project would be next on the agenda.

While not strictly a solo album in the most pedantic sense of the word - Twin Shadow's George Lewis also claims co-writing credits for over half of 'Dreams Come True' - CANT is about as far away from the delectable harmonies and sonic landscapes of Grizzly Bear as you're ever likely to find. Taking the blueprint from both his regular band and side project's label, pioneering techno imprint Warp, 'Dreams Come True' is a complex record in that songs are forsaken for layered sounds, triple-dubbed beats and all sorts of computerised effects that make the organic folk of Grizzly Bear seem a million miles away.

Opening with the pulsating 'Too Late, Too Far', where a melange of pounding drums and repeated handclaps give way to an acutely driven bassline that recalls Bjork's 'Human Behaviour' were it to be showered in Warp's trademark bleeps and tones. The complicated 'Believe' follows suit, its leftfield electronica eclipsed by the subtly delivered mantra "You won't believe, things I haven't told you."

There's a soulful feel about 'The Edge', again bursting at the seams with complicated rhythms and an unashamed propensity to challenge the listener in every sense. 'Bang' then takes an unexpected diversion, stealing the melody from The New Seekers 'I'd Like To Teach The World To Sing' in all its glory. The downbeat tones of 'She Found A Way Out' resemble a Geiger counter being sparked into action, such is the vast array of unusual instrumentation proffered by Taylor and Lewis at regular intervals, while the echo-laden trip hop of 'Answer' carries with it the most prophetic vocal on the album ("It's been a while since you needed me").

At times, 'Dreams Come True' does attempt to be too clever for its own good, and despite the looped feedback and eerie dubstep that transcends the instrumental title track into DJ Shadow territories, there's too much of the final third that ends up being forgettable by its own complexity. While comparisons with the likes of Beirut or even James Blake would perhaps be welcomed in Camp CANT, 'Dreams Come True' veers off in a world of its own all too often and ultimately ends up lost in translation when fluency is the key.