After a five year wait from the heart-warming indie-pop of Air Waves' debut album 'Dungeon Dots', singer-songwriter Nicole Schneit and Co. return with 'Parting Glances', named after the 1986 film starring Steve Buscemi as a gay man struggling with his life in New York. It's the pleasure of people-watching and the intimacy you can put onto the actions of those around you that is the focal point. The album illustrates this with warmth, incredible honesty and instrumental simplicity. 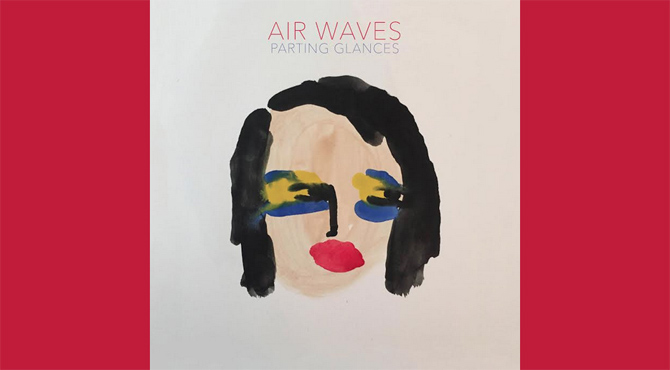 The distinctive difference between 'Dungeon Dots' and 'Parting Glances' is the narrative structure of the lyrics. In the former, Schneit cut through otherwise insincere and angst-ridden indie tunes by providing a heartfelt and personal catalogue of songs one can only see as charming and endearing. With her latest release, she has attempted to branch out such emotional capacity by establishing fictional characters whom the songs of this album follow. However, there is a feeling that these characters are never fully realized or believable in their own right and are, in fact, mere shadows of Schneit's own personal beliefs and emotions. They exist as assumptions, which are enough for the listener to engage and sympathise with but never without considering the cool and stoic vocals of Schneit who acts coy with their content. This isn't necessarily a criticism, as we all in some respect project our own experiences and emotions onto those we observe within the mundane. This album still reveals emotional truth and a sound of sincerity with its engaging hooks and simple everyday profundity in its lyrics.

As a result, this is a pleasant, easy-listening indie-pop album with some truly lovely songs, more specifically the tracks 'Horse Race', 'Fantasy' (which is dream-pop of the highest calibre, reaching dizzying Beach House heights), 'Frank' and 'Thunder'.

But it is never more than that. 'Parting Glances' is a streamlining of capability maintaining the initial strengths which made 'Dungeon Dots' such a refreshing listen in the first place. Schneit creates indie-pop at its catchiest and most enjoyable, and that's okay. 'Parting Glances' is a well-crafted album which is relatively safe when considering the urgency people have for band progression and evolution, but you can't persuade emotional honesty this pure which is why Air Waves still manage to put a smile on my face.