Review of Wake Up! Album by John Legend

There's a right way and a wrong way to cover bona fide classics. The wrong way involves politely and tastefully recreating the originals note by note, dutifully paying tribute to the song while tacitly suggesting that it is a dead, inert form, something so holy that it should not be changed or reinterpreted by its disciples, only ritually worshipped. The right way, as modelled here by John Legend and The Roots, is to treat the songs like living, breathing things, to play them with the passion and intensity with which they were first performed, and to play with them in order to bring out the elements that make them important and relevant pieces of music in 2010. Wake Up! collects eleven pulsating covers of politicised soul and funk songs from the sixties and seventies, plus one original composition. It demonstrates that those songs have a message which is just as relevant today as it was when they were first recorded, and an emotional force which is just as powerful. 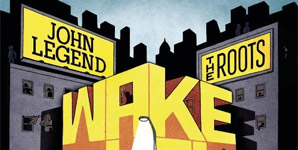 Everybody involved in Wake Up! is at the very top of the game. The Roots have already released one excellent album this year, the quietly impressive old-school hip hop record How I Got Over. It contained several socially-aware 'message' songs which featured great performances by the band's instrumentalists but were slightly hampered by clumsy lyrics ('Dear God 2.0' posed the wannabe-profound, actually-risible question 'If everything is made in China are we Chinese') and the absence of a vocalist consistently capable of rising to the occasion. Wake Up! solves this problem by relying on other people's lyrics and handing vocal duties over to a spectacularly on-form John Legend, the soul singer who appeared on How I Got Over's 'The Fire'. The results are masterful; songs both famous (Marvin Gaye's 'Wholly Holy') and relatively little-known (Baby Huey and The Babysitters' 'Hard Times') are made to sound vital and urgent.

The album's stand-out track is a raging twelve-minute version of Bill Wither's anti-war song 'I Can't Write Left Handed' which sees Legend cut loose, channelling all the anger and sadness of the song's protagonist, a soldier fighting in the Vietnam war. As the track's delicate dabs of guitar are overwhelmed by a sudden burst of swirling, swooping hammond organ and crashing drums, Legend's howl of 'strange little man over here in Vietnam...I ain't never done nothing to/He done shot me in my shoulder' strikes the listener straight in the heart. As Legend is keen to point out early in the song, the lyrics are strikingly relevant to today's situation, with American (and for that matter, British) troops still fighting and dying abroad. This is one of the album's messages: a good number of protest lyrics from decades ago are still frighteningly appropriate. Not much has got better. This fuels the streak of anger and sadness running through the album, but there are also consistently moments of positivity and encouragement (there is, for example, a version of 'I Wish I Knew How It Would Feel To Be Free' which is more optimistic than Nina Simone's famous reading; accompanied by gospel-influenced handclaps and backing vocals, Legend sounds as if he believes freedom is just around the corner). This potent mix of emotions has long been a feature of American soul music, which has been a vehicle for black Americans to simultaneously rage against the injustices they have suffered and express a hope that better times are coming. Wake Up! does not merely pay passive homage to that tradition, it brings it back to life and shows that these mixed emotions are a fair response to the situation in Obama's America. Essential listening.