Howler - America Give Up Album Review

Review of America Give Up Album by Howler

'America Give Up' feels a bit of a fickle, patriotic title for a debut that seems to almost be a dig at their country. Now, it's not because Howler don't like being stateside, but simply because they have bigger fish to fry. They want success everywhere, and who can blame them, they've even taken the first active steps in the Howler Vs World battle. The Minnesota four-piece agreed a deal with London label pioneers, Rough Trade. The UK have even started their love affair, after they supported London's highly acclaimed, The Vaccines this last month. 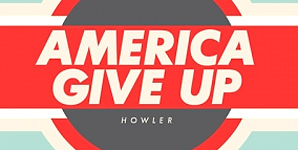 Howler started to cause some waves in the indie water when they released EP, 'This One's Different' back in the summer. Their sound is a fearless fusion of punk and indie from the offset. There's some Ramonesy riffs, some proper rock 'n' roll 50's style riffs and some drum fills like err, The Drums. Their full-length sounds even ballsier than their first offering with some re-recordings and the odd name change. This album has its glorious highs, new anthems galore. Opener, 'Beach Sluts' starts the album as it means to go on. The noisy chorus overshadowing the summery title and laid-back, clap-hungry verses for a different kind of mash up. 'Back Of Your Neck' begins and ends with a beauty of a 50's throwback riff and a collection of 'ooohs', classically catchy. Tracks, 'Free Drunk' and 'Pythagorean Fearem' are embedded in distortion from the running punk influence.

'Told You Once' features the line, 'I wish that there was something I could do, because I hate myself more than I hate you.' It's a defining line of Howler's. Through all the fearlessness and boyish behaviour, there are real emotions contained, inevitably ready to leak all over the sides at points. 'I want you right now, I need you right now,' states Jordan Gatesmith, the brains behind Howler. For someone who is 19 and just starting out on this music road, (despite being in several bands before, choosing Howler as the one to take forward) this record is something for the whole band to be proud of. 2012 promises to be a good year for Howler, with this release, and an already packed tour schedule for the first quarter of the year, which includes trips back to the UK and Tokyo. Hard work pays off. They could very easily do a Vaccines, 400 capacity in Feb, 2 nights of a 5000 strong crowd in December. Let's see.

Howler - America Give Up