Coldplay are set to launch a brand new EP this summer entitled 'Kaleidoscope'. It comes alongside surprise promotional non-single 'Hypnotised', which is released in time for frontman Chris Martin's 39th birthday. The band will hit the road again on their major world tour this month. 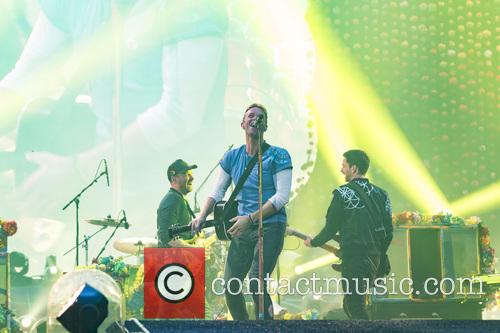 A lyric video for the uplifting new song has also been unveiled. Directed by Mary Wigmore, it is a montage of appropriately kaleidoscopic water images, fitting neatly with the chiming, ambient nature of 'Hypnotised'. It's the first track to be released from the 'Kaleidoscope' EP, though Chris has described it as 'a new non-single'.

'Kaleidoscope' is announced nearly three months after the release of their last EP 'Live From Spotify London'. Also expected to feature on it are new songs 'All I Can Think About Is You', 'Miracles 2' and 'A L I E NS', as well as their recent collaboration with The Chainsmokers - 'Something Just Like This' - which is also set to appear on the duo's forthcoming debut album 'Memories...Do Not Open'.

The EP has been described as a follow-on from Coldplay's last album 'A Head Full of Dreams', which they released in 2015 and continued their unblemished run of UK number ones. The album sold over 5 million copies and featured the hit singles 'Hymn for the Weekend' and 'Adventure of a Lifetime'.

Coldplay's A Head Full of Dreams Tour continues with back to back dates at Singapore's National Stadium on March 31st and April 1st. They'll also hit the Philippines, Thailand, Taiwan, South Korea and Japan with support from Jess Kent and RADWIMPS before returning to Europe for a number of shows in the UK, Germany, France, Italy, Sweden, Austria, Poland and Belgium with support from AlunaGeorge, Femme Schmidt, Tove Lo, Lyves, Mew and Embrace.

More: Coldplay are the most streamed band on Spotify

Meanwhile, AlunaGeorge and Tove Lo will also join them on some of their North American dates alongside Alina Baraz and Izzy Bizu. Their last date is on October 8th at the Qualcomm Stadium in San Diego. They are also due to make an appearance at Global Citizen Festival in July.

'Kaleidoscope' EP is set to be released on June 2nd 2017 through Parlophone Records.