The award-winning singer's recent tweet implies that her next album could be released later this year. 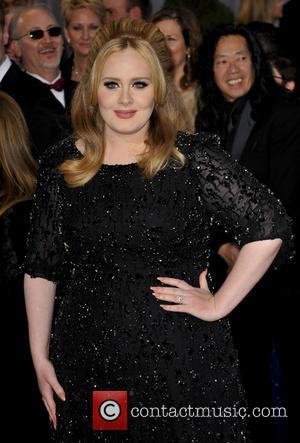 Adele has dropped a big hint that suggests her third album may be released towards the end of 2014.

The singer, who celebrated turning 26 on Monday (May 5th) took to Twitter to post a cryptic message to her 20.1 million followers.

"Bye bye 25... See you again later in the year x," she wrote, along with a photo of herself giving the thumbs up.

Could 25 be the title of her next album?

The Londoner's return to the music scene would be hotly anticipated, she already received six Grammy-Awards for '21' and dominated the charts with tracks like 'Rolling In The Deep' and 'Someone Like You.'

Last year she also received an Academy-Award for Best Original Song for 'Skyfall,' the soundtrack to the 2012 James Bond film.

The songstress has had a lengthy break since releasing her last album, but this is mainly due to raising her 18-month-old son Angelo, whom she shares with charity entrepreneur boyfriend Simon Konecki.

After dominating the 2012 Grammys, Adele told US Vogue, "I am f***ing off for four or five years. If I am constantly working, my relationships fail."

"So at least now I can have enough time to write a happy record. And be in love and be happy," she added. "I'm never writing a breakup record again, by the way. I'm done with being a bitter witch."

MORE: Adele Will Deliver Album At Her Own Pace

However, this past January Phil Collins revealed, to Inside South Florida, that he was working on writing songs with Adele, despite not knowing much about her. "I wasn't actually too aware [of her]. I live in a cave. She's achieved an incredible amount and I really love her voice and I love some of that stuff she's done," he said.