Review of Let It Pretend Album by Dirty Ghosts 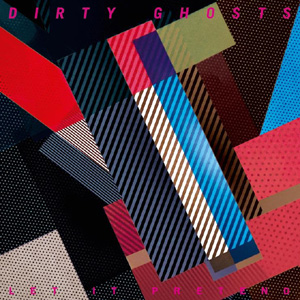 The album kicks off with 'Some Kids' - a fantastic tune that attacks with tribal drumming and a thick, almost funky bass sound. These two elements sound a lot like an updated, less 80s version of Jane's Addiction. The song rattles and builds and is, unfortunately, the pinnacle of a fairly confused and largely directionless LP.

That isn't to say that this is a bad record - there are some great tunes here. In fact, there's probably more good than bad here. In terms of the good: 'Battery' features a twisty chorus and some reggae influenced liquid basslines while sounding a little like The Jam and 'Quicksand Castle' has a brilliantly gritty underground punk sound to it. The low budget, lo-fi production suits the feel of the song. On the other end of the spectrum is 'Cataract', which is full of so many digital beeps and boops on top of a discordant noisy bedrock. It is a fascinating listen.

In terms of lows however, there are a few. 'Light Like Speed' can't make up its mind if it wants to be a punk tune or not and so never really takes off quite how it should. 'Hologram' is nothing more than obvious Gang of Four worship with its scratchy guitars and 'So Shallow', again, never takes off like it should and fades out with a Spandau Ballet bongo break. I've only mentioned Gang of Four once in this review, but it is distractingly clear that this trio are huge fans: the guitars wouldn't sound the way they do without them across the LP and the attack of the bass wouldn't quite be the same. Another issue with the album is the lo-fi, low budget production. In some places this fits, as on the aforementioned 'Quicksand Castle'; but on more expansive numbers like the album's title track, it feels like their only big, anthemic chorus loses some its punch due to being buried under muddy production.

There are some great moments on 'Let It Pretend'. Hidden in here somewhere is a knockout five stars out of five mini album. The potential here is massive, Dirty Ghosts just need to focus a bit more and decide if they want to be post-punk or indie, move away from aping Gang of Four and write some killer tunes. 'Let It Pretend' just falls short on all counts.