Zsa Zsa Gabor has been rushed back to hospital after an emergency services call from her husband, though her condition is not thought to be life threatening. 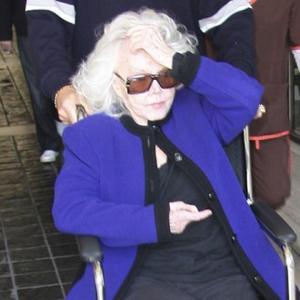 Zsa Zsa Gabor has been rushed back to hospital.

The ailing 93-year-old Hollywood legend was taken to the UCLA medical centre in California after an emergency services call from her husband Prince Frederic von Anhalt - though her condition is not thought to be life threatening.

Prince Frederic told website TMZ: "I just called an ambulance. She has to go back to UCLA."

Her spokesman Ed Lozzi later clarified: "She is not in a life-threatening situation."

Zsa Zsa has suffered ill health all year and spent most of August - including her ninth wedding anniversary - in hospital after undergoing hip replacement surgery.

The veteran actress suffered further complications after the operation including a blood clot, for which she had to have more surgery, and at one point her condition worsened to the point where she was read the last rites by a priest.

However, the Hungarian-born actress left hospital the very next day on her own insistence, with her husband saying she wanted to live out her final days at home.

Her spokesperson said at the time: "Her health has been up and down ever since her hip replacement. She wanted to spend her final days at home. It is a very difficult time for her family."

Zsa Zsa's career spans five decades and includes cinema classics 'A Touch Of Evil' and 'For The First Time'.

She has also famously been married nine times, and has one daughter, Francesca Hilton, by her second husband, hotel magnate Conrad Hilton.