Zooey Deschanel is being lined up for the role of sexy secretary Betty Brant in the forthcoming 'Spider-Man' reboot. 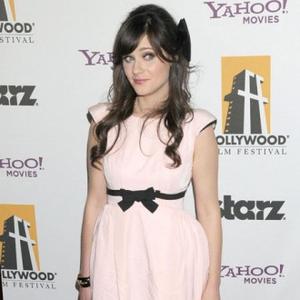 Zooey Deschanel is being lined up for a role in the new 'Spider-Man' movie.

The actress-and-singer is being pursued by the director Marc Webber to play the role of Betty Brant in the forthcoming reboot starring Andrew Garfield as the web-slinging hero, as he believes she "fits the bill" of the sexy secretary.

A source said: "Betty was a minor character in the previous Spidey movies but Marc has big plans for her.

"He wants a strong performer to carry the role and Zooey fits the bill perfectly. The role is hers if she wants it."

Betty has previously played by Elizabeth Banks, who starred in the first three movies feature Tobey Maguire as Spider-Man.

The forthcoming movie has a number of big names attached, including Sally Field, Rhys Ifans and Emma Stone.

Zooey, 30, made her acting debut in 1998 TV series 'Veronica's Closet', but has since starred in a number of successful films, including 'Hitchhiker's Guide to the Galaxy' and '500 Days of Summer'.

She also performs with her band She & Him and models for make-up brand Rimmel.