Arguably one of Deschanel’s standout roles was alongside Joseph Gordon-Levitt in the cult 2009 romantic-comedy 500 Days of Summer. The actress contributed a number of songs to the film’s soundtrack, including her version of Nancy Sinatra’s 1967 single ‘Sugartown.’

However it was subtle grandeur of She & Him’s take on the classic Smiths’ track ‘Please, Please, Please Let Me Get What I Want’ that proved to be the highlight. Another lush piece of cinematic pop, the delicately plucked guitar compliments the singer’s yearning vocals in what is considered to be one of the better renditions of the often-covered track.

One of the internet’s true hidden gems is the fan shot footage of She & Him’s performance from the LA Times Food & Wine Festival in 2010.

While it wasn’t the first time the duo had covered a track by California surf-pop legends the Beach Boys (a stripped-down version of ‘I Can Hear Music’ made up the b-side to their biggest selling single ‘In The Sun’), it is Zooey Deschanel’s effortlessly lilting vocals mixed with the gentle strumming of her telecaster-shaped ukelele that make this live track one of her warmest covers to date. 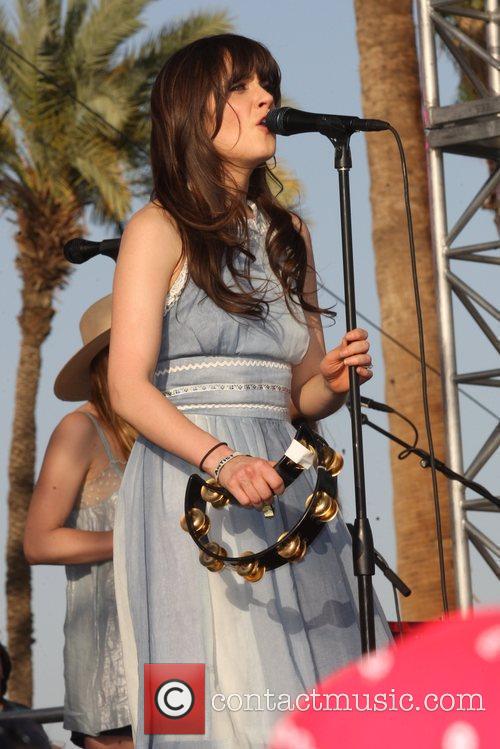 Zooey Deschanel performing onstage as one half of She & Him

‘I’ll Never Find Another You’

Away from She & Him, the actress and singer has also been known for the occasional duet - one of the most gorgeous being a cover of the Seekers’ 1964 track ‘I’ll Never Find Another You’ with Deschanel’s then-husband Ben Gibbard (of alt-rockers Death Cab For Cutie and the Postal Service).

The pair performed the track live for a fund-raising concert in Seattle in 2010, where Gibbard was playing a solo show before being joined onstage by the actress for an acoustic rendition of the tender pop ballad. The pair separated in 2011.

In 2011, the singer co-founded HelloGiggles, an entertainment and lifestyle website which she continues to write and contribute articles toward. Among her contributions were a series of homemade videos featuring the singer covering a range of songs with famous friends including Sasha Spielberg, Ben Schwartz and her 500 Days co-star Joseph Gordon-Levitt. Among the songs covered were Patsy Cline’s ‘Crazy,’ the Carpenters’ ‘Yesterday Once More,’ and ‘Tonight You Belong With Me’ - the classic American song made famous in the Steve Martin movie The Jerk.

One of Deschanel’s most unexpected (and possibly most memorable) cover saw the actress channel The King of Rock & Roll in the unlikeliest of places.

In one of the most surreal moments from the second series of ‘New Girl,’ the actress performed at a funeral dressed as Elvis Presley. With the wig, the famous white suit and the voice almost down to a fine art, Deschanel somehow leads a church full of mourners through a rousing rendition of ‘In The Ghetto.’

More: How ‘New Girl’ Became One Of The Best Shows On Television

She & Him announced the release of their new album, Classics, via their Twitter page last night (August 12). The album is due out later this year.