It's a sign of how blas' we're becoming about British dance music's ability to savage our preconceptions that nobody has reacted to the release of Dedication with anything approaching astonishment. Zomby's new album is coming out an indie label, 4AD, and features a vocal by Animal Collective's Noah 'Panda Bear' Lennox. It's a dance record, but nobody much will want to dance to it. It's unmistakeably influenced by dubstep, but it can trace its lineage back to the likes of Aphex Twin as well as to Burial, and its great-uncle on its mother's side may well be pioneering BBC Radiophonic Workshop guru Delia Derbyshire. It's an emotionally complex album, inspired by Zomby's dead father; at times it's sombre and downhearted; then, suddenly, it becomes almost celebratory. Five years ago, all of this would have seemed surprising and envelope-pushing. But in the intervening period, dubstep and post-dubstep producers have pushed the envelope so thoroughly that Dedication's attempt to give it a further nudge has shocked absolutely nobody. 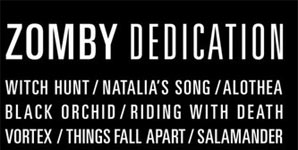