Zoe Saldana only wears clothes that complement her personality and won't be swayed by names when she's picking out outfits. 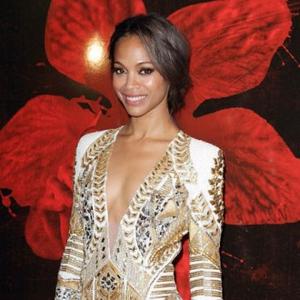 Zoe Saldana only wears clothes that complement her personality.

The 'Star Trek' actress is a big fan of many designers but insists she won't be swayed by names when she's picking out outfits.

She told People: "I love so many designers. From the older iconic ones like Lanvin, Givenchy. I've got Dolce & Gabbana, Versace, Diane Von Furstenberg and Calvin Klein. I wore an amazing Louis Vuitton dress to the Golden Globes.

"But I look to find myself in them and not to get lost in them. So if I see an outfit from a designer that I really feel will complement my personality and I know that I would wear it well, I will definitely fight for it."

The 'Avatar' star created the website with her fiance, model and entrepreneur Keith Britton, and it seeks to list every magazine shoot, cover and campaign models, photographers, make-up artists and celebrities have been involved in.

Zoe said: "It's really for anyone who loves fashion magazines, luxury brands, celebrities, models - you can browse them all MyFDB.COM."

The site works in the same way IMDB does for the film industry, listing actors, directors producers and crew, and which movies they have been involved in.