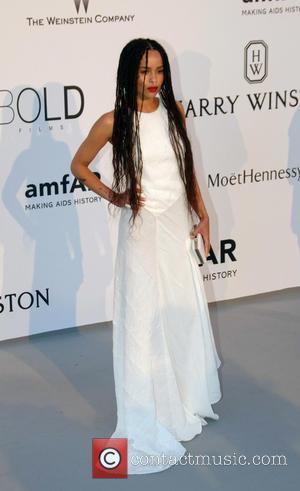 Chelsea Tyler's famous father, Aerosmith rocker Steven, was among the first to reach out to the American Woman hitmaker after his headline-grabbing onstage accident at a gig in Sweden on Tuesday (04Aug15), when the crotch of his trousers ripped and exposed his penis.

Kravitz later published a message he had received from Tyler joking about the scandal, and now his daughter Zoe has weighed in on the drama by sharing a text conversation with her friend Chelsea, in which they both cringe over their fathers' behaviour.

The actress posted a screengrab of her messages to Chelsea on her Instagram.com page with the caption "#rockoutwithyourc**kout".

Zoe wrote in the texts, "So our dads talking about d**ks on social media is cool" adding an 'embarrassed' emoticon while Chelsea replied, "What? Oh no.. Twitter? Oh God... Haha #penisgate."