Matt Damon talks about the complexities of his character in a short featurette for his latest movie 'The Great Wall'; a film set in China during the Song dynasty which follows William Garin - a young man captured and given to the army at a very young age. Together with his loyal companion Pero Tovar, he fights every battle and they always have each other's back. Pretty soon though, he starts to wonder if there's more to life than just fighting for money. But he'll have to break through more than just the defences of the Chinese army if he wants to find out, because there are supernatural and monstrous forces at work here.

Lu Yanshi is ripped away from his family and arrested as a political prisoner during China's Cultural Revolution, forced to work in a merciless labour camp. He makes a futile escape attempt in a plan with his daughter Wanyu, but he is soon re-captured and put back to work. Some years later, he is finally freed when the Revolution comes to an end, but he is less than welcomed when he returns home. His wife has suffered an accident which has left her with permanent amnesia and she is unable to recognise her husband upon his return. She shuns Yanshi, and continues to wait for her husband's return, and so he does what he can to jog her memory and convince her that it's him. When that fails, he must find another way to remain close to her - but that may mean abandoning their marriage.

By Jules Brenner
Excellent
After political (Raise the Red Lantern), sexy (Ju Dou) and reflective (The Road Home) films, writer-director Zhang Yimou embraces the aerodynamic action of digitally enhanced kung fu swordplay made famous in Crouching Tiger, Hidden Dragon. The object here is to outdazzle that genre landmark and, perhaps, to outdo it at the box office.

It's probably too late and too familiar a technique to do either, but there's plenty to admire despite those limitations, for which it has already received critical and award level acclaim. At the time of this writing, it is one of the 2002 Oscar nominees for Best Foreign Language Film. 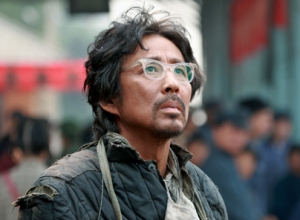 Lu Yanshi is ripped away from his family and arrested as a political prisoner during...