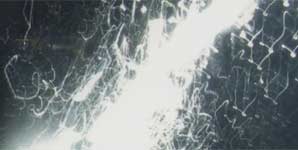 A very interesting album from start to finish. Returning after 2007's The Garden, Zero 7 are still labelled as trip-hop by the media, but I have to say they are slowly turning themselves away from the popular 90's sub-genre and more into a sort of left field Basement Jaxx at their most introspective. Pop influence pervades the album and injects the songs with a lot of hooks.

On first listen, the album can come across as very alien, with stark and sometimes dissonant audio cues popping in and out. The guitar on standout track Mr McGee combined with the stop/start vocal cut in the chorus is a perfect example of this. Given a few listens though and the songs slowly begin to approach you, digging in and staying solidly in your head.

A wide range of guest appearances inject additional interest into the album, from Eska Mtungwazi, Martha Tilson (excellent on Swing) and Rowdy Superstar. It's nice to hear Henry Binns, one half of Zero 7, contributing to the vocals this time around also, after a successful debut on The Garden. Zero 7, in the course of an album, manage very successfully to branch out from what brought them fame in the first place. Yeah Ghost sees a big step in Binns and Hardaker moving from producers and becoming singer-songwriters: beautiful songs like Pop Art Blue are great examples of where this group can go.