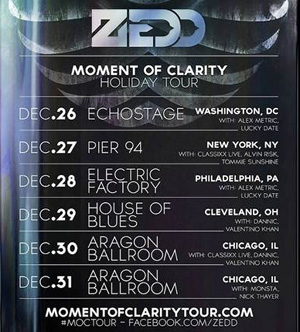 Multi-platinum artist Zedd announces the addition of six new dates on the "Moment of Clarity Tour" which is currently making its way across the US.  The first of the added shows kicks off at Washington DC's Echostage, before stops in NYC, Philadelphia and Cleveland, all leading up to a two-night stand at Chicago's Aragon Ballroom on New Years Eve.  Support acts include Classixx, MONSTA, Alvin Risk, Alex Metric, Dannic, Lucky Date, Valentino Kahn, Nick Thayer and Tommie Sunshine.

"Stay The Night" is available on the Clarity - Deluxe Edition, out now.  The deluxe also includes "Push Play," featuring Miriam Bryant, a Zedd remix of Skrillex and The Doors' "Break'n A Sweat," and a Zedd remix of Aussie electronic duo Empire of the Sun's "Alive."  Target will offer an exclusive deluxe edition that includes acoustic versions of the singles "Clarity" (featuring British singer Foxes) and "Spectrum" (featuring singer-songwriter Matthew Koma).

Released by Interscope Records in October, Clarity climbed to No. 3 on the Billboard Dance/Electronic albums chart fueled by the success of "Spectrum," "Stache," and the title track. The single "Clarity"climbed to No. 2 at Top 40 radio, went Top 10 on both the Billboard Hot 100 and the Spotify singles chart, and has been certified platinum. The video, which led to a 2013 MTV Video Music Award nomination for "Artist To Watch" for Zedd, has racked up more than 20 million views on YouTube.