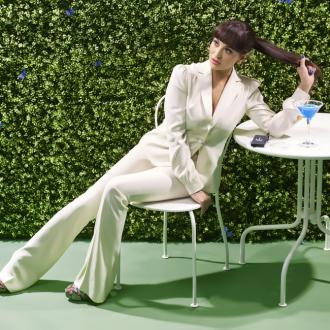 The 31-year-old DJ - who launched a successful ''attention-grabby'' fairtrade accessories collaboration with ASOS in December - is now releasing a new line of animal-themed headphones called 'The Wild'.

Speaking exclusively to BANG Showbiz, Zara said: ''The Christmas collection were LED chords so they'd light up and also pump to the music. They were quite attention-grabby.

''This next one is an animal themed collection. We're calling it 'The Wild' collection so we've got some really amazing ones with cat ears and then we've got ones with beads that are like honeycomb, and snake print. They're all very fun and cutesy, fashion vibe. I've definitely been wearing them while I've been DJing but they're not available yet.''

Meanwhile, the model - who was busy supporting Mark Ronson in Switzerland and Solange Knowles in London on the decks last week - has turned her attention to fronting the campaign for blu eCigs to promote a healthier lifestyle, and revealed her favourite flavour is ''strawberry and mint''.

Zara said: ''The 'Taste of the Summer' campaign is all about the British summer time and enhancing the flavours associated with that.

''My favourite flavour is the strawberry and mint and I like the vanilla one too because it tastes like summer! I guess (smoking e-cigarettes) is so much more convenient these days, it's a lifestyle choice.''

'Zara Martin has been announced as the face of blu eCigs 'Taste the Summer' campaign.

blu eCigs (www.blu.co.uk) offers adult smokers a positive lifestyle choice this summer; without the smell, ash or tar. There are an array of flavours available, including vanilla, bluBERRY and cherry.