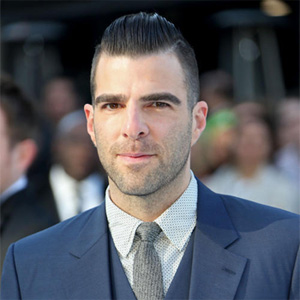 After a key role in the TV series 24, Zachary Quinto was launched into the A-list with his mesmerising turn as the villainous Sylar on Heroes, and his TV career has continued with American Horror Story. Between these series, the politically active actor-filmmaker memorably recreated the iconic role as Spock in J.J. Abram's reimagined 2009 Star Trek movie and went on to win  two Independent Spirit Awards for producing and starring in the 2012 financial drama Margin Call. Now he's back as Spock, pushing the character further in the sequel Star Trek Into Darkness.

What's the biggest challenge about taking on such a legendary TV and film character?
There's a general challenge for me playing Spock, who is often erroneously assumed to have no emotion. So to cultivate an inner life and to convey actually the fact that there is quite a deep well of emotion in this character is a consistent challenge. But honestly, if you're talking about the biggest challenge of playing Spock, I would say shaving my eyebrows takes the cake!

How did you react when you first landed the role in Star Trek?
Firstly, I reached out to a friend of mine, a good friend from college who has been to no less than 50 Star Trek conventions. And I asked him to compile for me a booklet of information on the history of Vulcan and the life of Spock and the family tree. And we began to enter into a session of tutorials, which lasted only until the time when it was announced that I was going to play Spock, which was maybe another month and a half or two months later. And that's the first time that I met Leonard Nimoy. So I fired my first tutor and went with the second! Leonard Nimoy usurped that position. He has subsequently become someone who's enormously important in my life, both personally and creatively.

What is your favourite thing about Spock?
I value Spock's compassion and his faith in humanity. And also his measured expression as well. I like that he's not irrational, and that ultimately he's true to himself.

Have you kept any props from the film set?
During the first movie, we had to hand in all of our accessories at the end of the day - the badge, phasers, Starfleet ring, communicator. And we would also cut up every pair of ears that I wore and throw them into the garbage. Which I felt was just so wasteful! So in the second movie I asked politely and kindly if I could preserve a couple for my own collection of ephemera, which I did. So now I have a couple of pairs of ears. In particular one pair that I wore during the fight scene that I had with Benedict Cumberbatch on the trash barge, which is speckled with green blood. Very cool.