Zach Galifianakis: Hangover 3 To Be Set In Mental Home?

Zach Galifianakis has heard a third 'Hangover' movie will tell the story of his character Alan trying to escape from a mental home with the help of Phil and Stu. 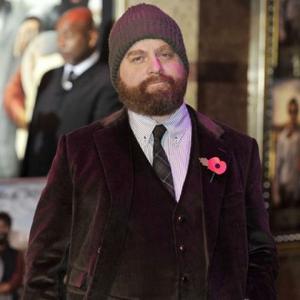 Zach Galifianakis believes the 'Hangover 3' will be set in a mental asylum.

The 41-year-old actor - who stars as Alan Garner in the first two Todd Phillips-directed films - has confirmed a third project is definitely in the works because he has been contacted about it and thinks he knows the storyline already.

He said: "They want to do a 'Hangover 3'. I'm getting fricking phone calls already."

The portly star added to Rolling Stone the third movie may change from the format of the first two and see his character escaping from a home for the mentally ill with help from Phil Wenneck (Bradley Cooper) and Stu Price (Ed Helms).

Filmmaker Todd has previously revealed another film in the series would be the last and thought it would be good to change the "template" of the franchise.

He said: "If we were to do a third one, and quite honestly we really haven't talked about it. I think we have a clear idea where that would head and it's certainly not in the same template you've seen these movies and obviously we always envisioned it as a trilogy as you can imagine, the third would very much a finale and an ending.

"The most I could say about it and I haven't discussed it with these actors is that it is not following that template but very much a new idea. As far as where it takes place. I'm very open like the Olympic committee to being pitched and presented cities. Flown around with wine and women and bribed and then I will make my decision."