Galifianakis Lights Up A Joint On Late-night Tv 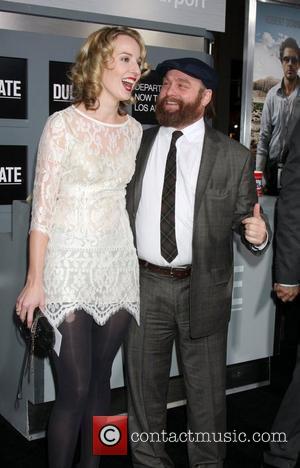 Funnyman Zach Galifianakis stunned American TV viewers on Friday night (29Oct10) when he lit up a joint and started smoking it during a political chat show.
The Hangover star was making a point about the upcoming vote for marijuana legalisation on Real Time With Bill Maher when he took the roll-up and a lighter out of his blazer pocket.
He said, "It's a tricky thing politically to jump on that bandwagon (and vote for the legalisation of pot) because I think that maybe people still see it as taboo."
Galifianakis then started puffing away and offered the joint to fellow guest Margaret Hoover, a conservative news reporter, who smelled the cigarette and verified it was the real thing.
The funnyman continued smoking as the political debate on the show continued, and then raised a laugh by screaming, "Oh my God, look at those dragons!", poking fun at the stereotype of stoners.