'Hangover II' actor Zach Galifianakis acts like a ''giant baby'' when people want to have pictures taken with him, because they treat him ''like a cartoon''. 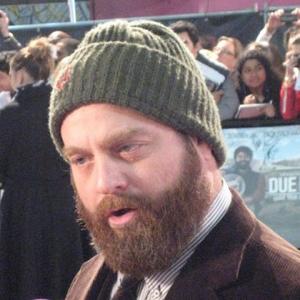 Zach Galifianakis is "treated like a cartoon" when people want pictures with him.

The 'Hangover II' actor - who plays Alan in the comedy movie - is not always in the mood to have his photograph taken with fans, and it leads him to acting like a "giant baby" about it.

He said: "I'm terrible about people wanting to take pictures with me.

"I'm a giant baby about it. They treat you like a cartoon. There's nothing you can do except make light of it. That's if I'm in the mood. Sometimes I get super-bummed."

The 41-year-old actor-and-comedian lasted just two weeks as a musical guest on 'Saturday Night Live', which once involved pitching a sketch to a young Britney Spears that involved her being interviewed and then suddenly start bleeding from the mouth, but it did not go down too well.

He added to Rolling Stone magazine: "I remember staring at the ground for, like, 20 seconds, just silent - 45,000 open mics, and I'm trying to impress this 18-year-old pop star."

It is not the first time Zach has failed to impress a celebrity.

Earlier this year, he risked offending 'Glee' star Jane Lynch and her wife, and 'Modern Family' actor Jesse Tyler Ferguson and his boyfriend at the after-party for the White House Correspondents' Dinner.

He said to the group: "Nice to meet you! I didn't realize it was Gay Night by the swimming pool."

But he was picked up on it by his other half, he added: "My girlfriend said, 'I gotta tell you Zach - that did not go over well. You have to watch people's reactions!' "