Zach Braff has been inspired by Kristen Bell to try to raise $2 million through Kickstarter.com to help fund his new independent film 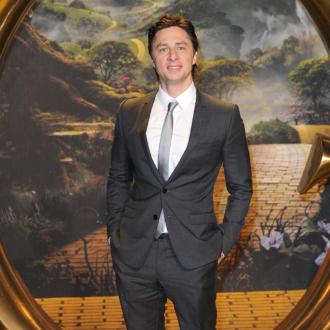 The 'Oz: The Great and Powerful' star wants to emulate the success of the fundraising campaign run by his pal Kristen Bell through Kickstarter.com recently, by raising $2 million through donations for the independent sequel to his 2004 hit movie 'Garden State' by May 24.

The 38-year-old actor reached out to the public in a funny pitch video, featuring cameos from his former 'Scrubs' co-star Donald Faison, as well as 'The Big Bang Theory' star Jim Parsons and comedian Chris Hardwick, in a bid to raise money for his next feature called 'Wish I Was Here', which he co-wrote with his brother Adam.

He said: ''I was about to sign a typical financing deal in order to get the money to make 'Wish I Was Here,' my follow up to 'Garden State.' It would have involved making a lot of sacrifices I think would have ultimately hurt the film.

''After I saw the incredible way 'Veronica Mars' fans rallied around Kristen Bell and her show's creator Rob Thomas, I couldn't help but think (like I'm sure so many other independent filmmakers did) maybe there is a new way to finance smaller, personal films that didn't involve signing away all your artistic control.''

The movie - which would see Kristen Bell reprise her role as the witty private investigator from the original TV series - will go into production this summer after exceeding its $2 million goal in a grass-roots fundraising campaign.

Warner Bros, though initially hesitant to greenlight the project, eventually agreed to fund marketing and distribution for the movie if Thomas and Bell could raise the capital to make it.