Zac Efron and Vanessa Hudgens have called time on their relationship after four years of dating, but are still said to be close friends. 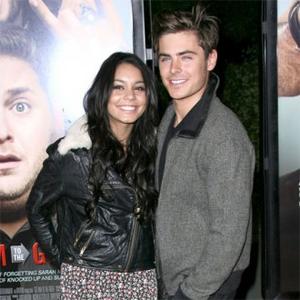 Zac Efron and Vanessa Hudgens have called time on their relationship.

The 'High School Musical' co-stars - who first met on the set of the Disney movie franchise in 2005 - are said to have split amicably and are still good friends.

A source told E! Online: "It's nothing dramatic. There's no third party involved. They are still talking and still friends. There's no drama. No one cheated. They just grew up."

However, friends of the couple believe their split won't be permanent and are hopeful they will eventually reconcile, as they will have a "bond between them forwever".

One pal told Hollywoodlife.com: "They realise that they both can trust each other, and there will be a bond between them forever. Career demands, distance and wanting to enjoy being single are the main reasons for the break-up. I'd be shocked if they don't get back together someday.

"They have hung out with each other as recently as two weeks ago and will continue to hang out, since they are best friends."