Zac Efron has joked he wants to get fat before he agrees to strip naked for a film role. 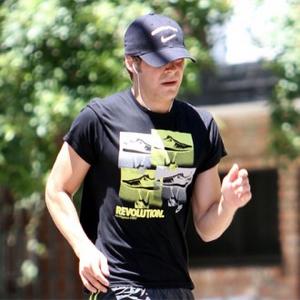 Zac Efron has promised to strip naked in a film - when he is fat.

The Hollywood heartthrob is prepared to reveal all on the big screen, just not in the way his legions of female fans are hoping for.

When asked if he would strip off for a movie, he said: "It would be funny to become fat first and then get naked in front of the camera.

"For the right role I would probably do almost anything. I think I would go quite far."

Although Zac is happy to have so many Women as fans, he doesn't let all the attention inflate his ego or allow himself to think he is irresistible to the opposite sex.

The 22-year-old actor - who achieved worldwide fame through his role as Troy Bolton in the 'High School Musical' movies - added in an interview with German newspaper Hamburger Abendblatt: "When girls scream it's not an acknowledgement you should let get to your head. It's exciting and a thrilling experience but you shouldn't pride yourself on it. I don't come home at night thinking I'm heaven-knows-who just because they start screaming. When I work hard for something it's easier to accept the acknowledgment for that. "This exaltation was just there and will disappear again. I always keep that in mind and concentrate on projects I will be able to do when this hype dies down."

Zac has been in a relationship with his 'High School Musical' co-star Vanessa Hudgens since 2005.